In the Bible, the giant Goliath came out from Gath to face the Israelites, and was smitten by a rock hurled from David's sling. Garfinkel says the weapons, the... 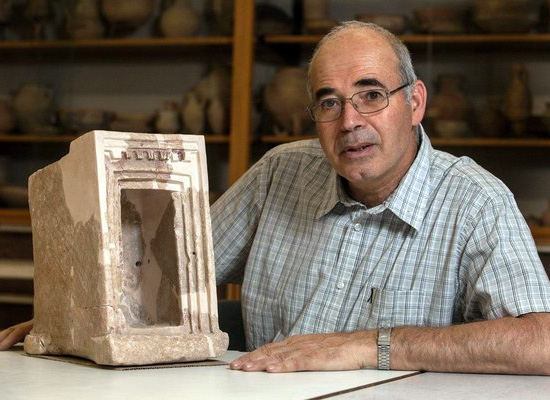 Yosef Garfinkel, an archaeologist at the Hebrew University of Jerusalem, shows off an ark, or stone shrine model, that was found during excavations at Khirbet Qeiyafa, an ancient settlement southwest of Jerusalem.
by Geoffrey Grider May 9, 2012
NOW THE END BEGINS SHARE:

An archaeological dig near Goliath’s biblical hometown has yielded evidence of Judean religious practices 3,000 years ago, pointing up fresh historical connections to the stories of King David and King Solomon.

Yosef Garfinkel, an archaeologist at the Hebrew University of Jerusalem, shows off an ark, or stone shrine model, that was found during excavations at Khirbet Qeiyafa, an ancient settlement southwest of Jerusalem.

“We have a city with a population relating to the Kingdom of Judah,” Yosef Garfinkel, an archaeologist at the Hebrew University of Jerusalem, told me today. “This is totally different from Philistine, Canaanite or the cult in the Kingdom of Israel.”

The site, known today as Khirbet Qeiyafa, is about 20 miles (30 kilometers) southwest of Jerusalem, on top of a hill overlooking the Valley of Elah. For the past five years, Garfinkel and his colleagues have been excavating the ruins of a fortified city there, situated across from what was once the Philistine city of Gath. In the Bible, the giant Goliath came out from Gath to face the Israelites, and was smitten by a rock hurled from David’s sling.

Garfinkel can’t vouch for the story of Goliath, but he says the weapons, the cult items and even the animal bones found around Khirbet Qeiyafa support his view that the settlement was a key military outpost for the historical House of David, riven by conflict. “There was something here quite military and quite aggressive,” he said. “It was not a peaceful village.” 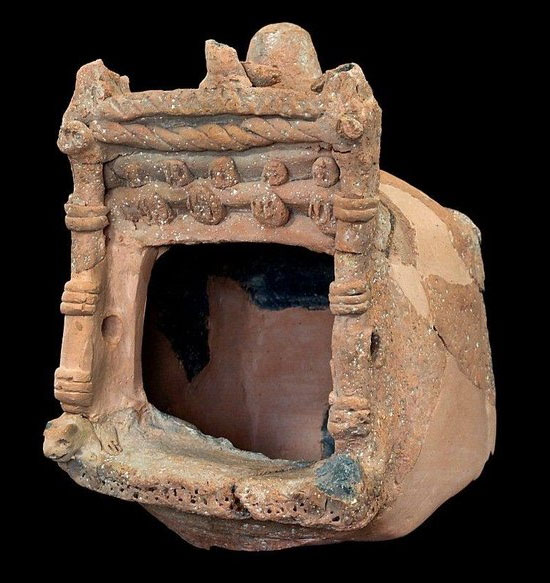 A decorated clay shrine model was found at the Khirbet Qeiyafa site.

Based on radiocarbon dating of burned olive pits found at the site, archaeologists believe the ancient city lasted for only 40 years, from 1020 to 980 B.C., before it was destroyed. Some skeptics have suggested that Khirbet Qeiyafa was just another Canaanite settlement, and that David was at best a minor chieftain, or perhaps a folkloric figure like Robin Hood. But Garfinkel said the items found at the site strengthen the connection to King David and the religious practices specified in the Bible.

“Over the years, thousands of animal bones were found, including sheep, goats and cattle, but no pigs,” he said in a news release from the Hebrew University of Jerusalem. “Now we uncovered three cultic rooms, with various cultic paraphernalia, but not even one human or animal figurine was found. This suggest that the population on Khirbet Qeiyafa observed two biblical bans — on pork and on graven images — and thus practiced a different cult from that of the Canaanites or the Philistines.”

Garfinkel told me that the absence of human imagery was peculiar to the Judeans. “In the northern Kingdom of Israel, you find human representations,” he said. 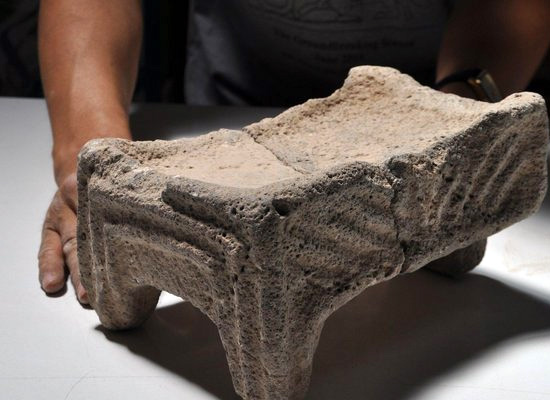 This basalt altar was found during excavations at Khirbet Qeiyafa.

The cult objects included five standing stones, two basalt altars, two pottery libation vessels and two portable shrines. Garfinkel said the shrines reflected a Mesopotamian architectural style that went back centuries before the era of King David, and probably inspired the look of the palace built by Solomon, David’s son. “It seems that Solomon didn’t want to be Canaanite and took a different model from Mesopotamia,” Garfinkel told me.

The shrines are boxlike containers made of stone or clay. “I think they were called in Hebrew ‘Aron,'” Garfinkel wrote in an email. “This had been translated into English as ‘ark’ and became a mystic artifact. I think that the Hebrew name was just a simple technical term: a box for keeping god symbols.”

Such shrines were probably similar in look to the “Ark of God” highlighted in the Bible as well as in such movies as “Raiders of the Lost Ark.”

The clay shrine has an intricate facade, featuring two guardian lions, pillars and birds standing on the roof. The stone shrine was painted red, and its facade is decorated with characteristic triglyph symbols as well as a triple-recessed doorway in front. Garfinkel said the Bible may have referred to those architectural features in its description of Solomon’s palace. The technical term usually translated as referring to pillars (“Slaot”) may actually be talking about triglyphs, while another term that was thought to refer to windows (“Sequfim”)  might instead refer to the doorways.

“Now you can see by the model that you have triglyphs at the roof, and you have recessed doorways,” Garfinkel said. Such features are also mentioned in biblical references to King Solomon’s temple, which was built decades after the age that gave rise to the shrines found at Khirbet Qeiyafa.

Will these finds settle the debate over the historical David? Garfinkel would like to think so. “Various suggestions that completely deny the biblical tradition regarding King David and argue that he was a mythological figure, or just a leader of a small tribe, are now shown to be wrong,” he said in today’s news release. source – MSNBC