The five denominations of United Church of Christ, Episcopal, Lutheran ELCA, Presbyterian, and United Methodist account for 4,623 of the gay-friendly churches listed, which is close to 70% of... 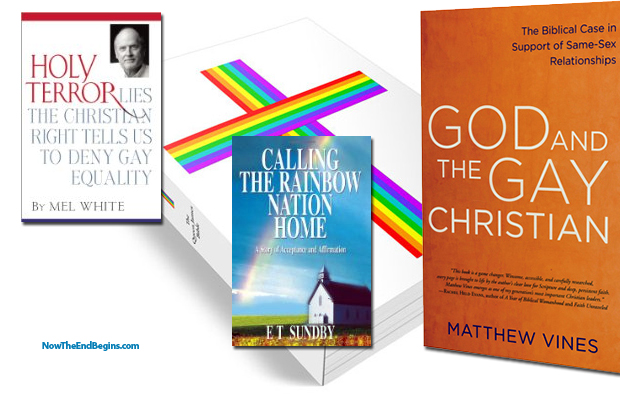 The Coming Of The New Dark Ages

“Let no man deceive you by any means: for that day shall not come, except there come a falling away first, and that man of sin be revealed, the son of perdition; Who opposeth and exalteth himself above all that is called God, or that is worshipped; so that he as God sitteth in the temple of God, shewing himself that he is God.” 2 Thessalonians 2:3,4

When the Christian church was hit by a hostile takeover in 325AD by Constantine of Rome, it disappeared for the next 1,200+ years into the shroud of pagan Roman Catholicism. We call that period of time the Dark Ages.

The Church that Jesus Christ died for and was entrusted to the Apostle Paul did not reemerge until the time of John Wycliffe and the Reformation. We call this time period The Enlightenment. In 2014, the LGBT Mafia is, for different reason and for a different outcome, attempting the same type of hostile takeover.

Step One: Rewriting The Scriptures

If the LGBT is to be successful, they first must neutralize all those pesky scriptures – Old and New Testaments – which condemn sodomy between men and lesbianism between women. Its kind of hard to sit in the pews and feel comfortable with the bible telling you your lifestyle is an abomination before a righteous and holy God. So they have been hard at work, publishing bible translations (perversions) which remove the offending passages. Bibles like the Queen James Bible aim to meet this need. Its authors say this:

Authors like Matthew Vines, already a queer celebrity, has written “God and the Gay Christian” which seeks to completely rewrite the historic biblical position against homosexuality. Book publishers who fear the wrath of being labeled as “homophobic” by the LGBT Mafia, are publishing books like these which are lapped up by a powerless, Laodicean church rendered impotent by a decade of cotton candy preaching from the like of Joel Osteen and others. Because of the spiritual deadness that exists, these tactics have been surprisingly effective. Just as Obama labels all those who oppose him and his Marxist politics as “racists”, the LGBT label all those who oppose their queer lifestyle as speaking “hate speech”, which coincidentally, is now a crime. The LGBT Mafia is ruthless when they attack, just ask Phil Robertson or the Benham Brothers. Freedom of speech only applies if you talk about the LGBT-approved narrative.

“For this cause God gave them up unto vile affections: for even their women did change the natural use into that which is against nature: And likewise also the men, leaving the natural use of the woman, burned in their lust one toward another; men with men working that which is unseemly, and receiving in themselves that recompence of their error which was meet.” Romans 1:26.27

A website called GayChurch.org has been compiling facts and figures of the number of churches and denominations that now offer a LGBT-friendly service, and we found this numbers to be quite revealing. Note the following taken from their website

And look at what they feel is the main reason for their success:

Obama’s legacy, whether it will be finished in this term or his third one, will be centered around 3 main things that he managed to pull off. Socialized Medicine, granting Illegal Aliens illegal citizenship, and Gay Marriage. Obama works so hard on promoting gay marriage, you would think he was getting a commission on the marriage licenses. The LGBT Mafia is very smart, they know that they need to ram this down our throats and sell it in order pass the rest of their agenda. And on this point, they have been astonishingly successful.

The LGBT’s campaign to radically alter your perception of the sin nature of homosexuality has for years been working through music videos, pornography, and in movies and television to make you feel bad if you will not condone their sinful lifestyle. Here is bible twister and ultra-Far Left Liberal Martin Sheen going through his paces in a pathetic attempt to make the bible says things that it does not say. If someone used this line of reasoning with you, do you know enough about the bible to refute it?  That’s why Paul commanded Timothy to “study” and to “rightly divide” the scriptures. (Join our online weekly bible study by clicking here).

Nearly every major Fortune 500 company – including Walt Disney – is on-board with promoting a sodomite lifestyle. At the Magic Kingdom, it is paraded in front of children, and if you object you’re a homophobe. A massive, active indoctrination program aimed at children is underway in the Public Schools via the new Common Core curriculum.

The bible says that in Revelation 3, the last church before the Rapture – Laodicea –  will be cold, dead, lifeless and powerless. The only thing they have an interest in is money and material wealth. In 2 Thessalonians, it talks about a great “falling away” which also will happen. In fact, both these things are happening right now, and because of that, this “hostile takeover” attempt by the LGBT Mafia will be successful. Bible believers will be marginalized, neutralized and either hauled off to a prison cell or driven out of town on a rail. We live in a great and dark age, and are watching the slow but steady fall of the Christian Church. But there is a ray of Hope is all this, and that’s the Rapture promised in Titus 2:13 and 1 Corinthians 15. And after we go, the rabid, ungodly hordes of the LGBT and others who preyed upon the Church will be left alone to have the empty shell that will remain. It will be a “form of Godliness”, but without any of the power of it. It will culminate in the apostate “whore of Babylon” church system, led by the Vatican, which the bible talks about in Revelation 17 & 18.