Hillary Clinton signaled support for “another hook” for net neutrality derived from a “modern 21st century telecom technology act” but conceded that it was unlikely to happen in the... 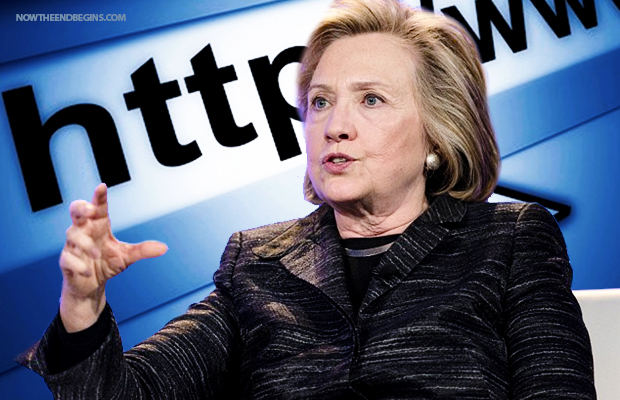 Although Clinton defended the FCC’s attempt to make the internet a public utility, she seemed open to other ideas to bring about net neutrality.
by Geoffrey Grider February 25, 2015
NOW THE END BEGINS SHARE:

Democrats have always been opposed to fundamental American rights like the Second Amendment, they are not overly fond of the First Amendment, the right to free speech against the government, either. By taking over and regulating the flow of free speech on the Internet, the greatest communication medium this world has ever seen, the government will be able to effectively squash the tide of truth that the main stream media has long since stopped reporting on.

When asked directly by Re/Code’s Kara Swisher if she supported the FCC’s upcoming vote, she said she supported President Obama’s position on the issue.

“I would vote for net neutrality, because as I understand it, it’s Title II with a lot of changes within it in order to avoid the worst of the utility regulation,” she said. “It’s a foot in the door, it’s a value statement, I think the president is right to be upfront and out front on that.”

Although Clinton defended the FCC’s attempt to make the internet a public utility, she seemed open to other ideas to bring about net neutrality.

“They have to have a hook to hang it on, so they’re hanging it on Title II,” she said, defending the FCC’s decision as “the only hook they’ve got” to bring about change.

Clinton signaled support for “another hook” for net neutrality derived from a “modern 21st century telecom technology act” but conceded that it was unlikely to happen in the near future. source