Snopes Is Lying, 1,000 Americans Really Did Die While Waiting For President Obama To Declare The 2009 H1N1 Swine Flu Outbreak A National Emergency

Since the H1N1 flu pandemic began in April, millions of people in the United States have been infected, at least 20,000 have been hospitalized and more than 1,000 have died, said Dr. Thomas Frieden, director of the Centers for Disease Control and Prevention. "We are nowhere near where we thought we would be," Frieden said, acknowledging that manufacturing delays have contributed to less vaccine being available than expected. "As public health professionals, vaccination is our strongest tool. Not having enough is frustrating to all of us."

President Obama declared a national emergency to deal with the “rapid increase in illness” from the H1N1 influenza virus, 6 months after it began in April and 1,000 Americans had died

Back in 2009, on October 6th at 8:47 AM, CNN Health reported that President Barack Obama had declared the H1N1 to be a national emergency. But the H1N1 Swine Flu outbreak had actually begun 6 months earlier in April, and in those intervening 6 months of precious time that was wasted, millions of Americans were diagnosed with the disease, and a thousand people died from it. This is how the “scandal free” president reacted to this deadly outbreak, 6 months late and a thousand American funerals later. Shame on you.

All over the Internet this morning, the liberal fake news media is in overdrive, furiously trying to scrub all traces of this story. Liberal revisionist history rag Snopes has rated what I am telling you right now as “false”, when in fact CNN as you can see below, reported it as quite true 11 years ago. I have included screenshots of the article as well because I am pretty sure it will either be edited or removed completely by end of day today.

Liberals lie, and today they are in overdrive as they try to not only hide the fact that 1,000 American died before President Obama took action, but try and convince you that President Trump is not handling the current outbreak situation when in fact he is doing a fantastic job. Not one American died before he took action, not one. Obama has literally a thousand deaths credited to his account. Share this story with everyone you know, get the truth out about what happened under Obama, and how the fake news media is covering for him right now.

FROM CNN HEALTH: “The 2009 H1N1 pandemic continues to evolve. The rates of illness continue to rise rapidly within many communities across the nation, and the potential exists for the pandemic to overburden health care resources in some localities,” Obama said in a statement. 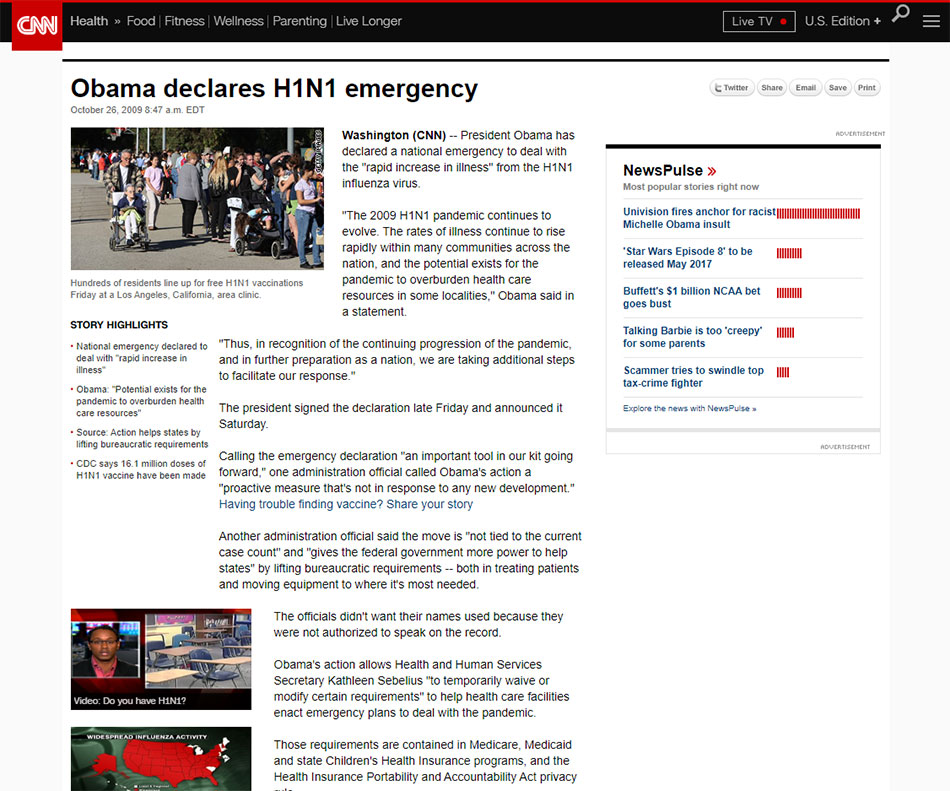 “Thus, in recognition of the continuing progression of the pandemic, and in further preparation as a nation, we are taking additional steps to facilitate our response.” The president signed the declaration late Friday and announced it Saturday.

Calling the emergency declaration “an important tool in our kit going forward,” one administration official called Obama’s action a “proactive measure that’s not in response to any new development.” Having trouble finding vaccine? Share your story 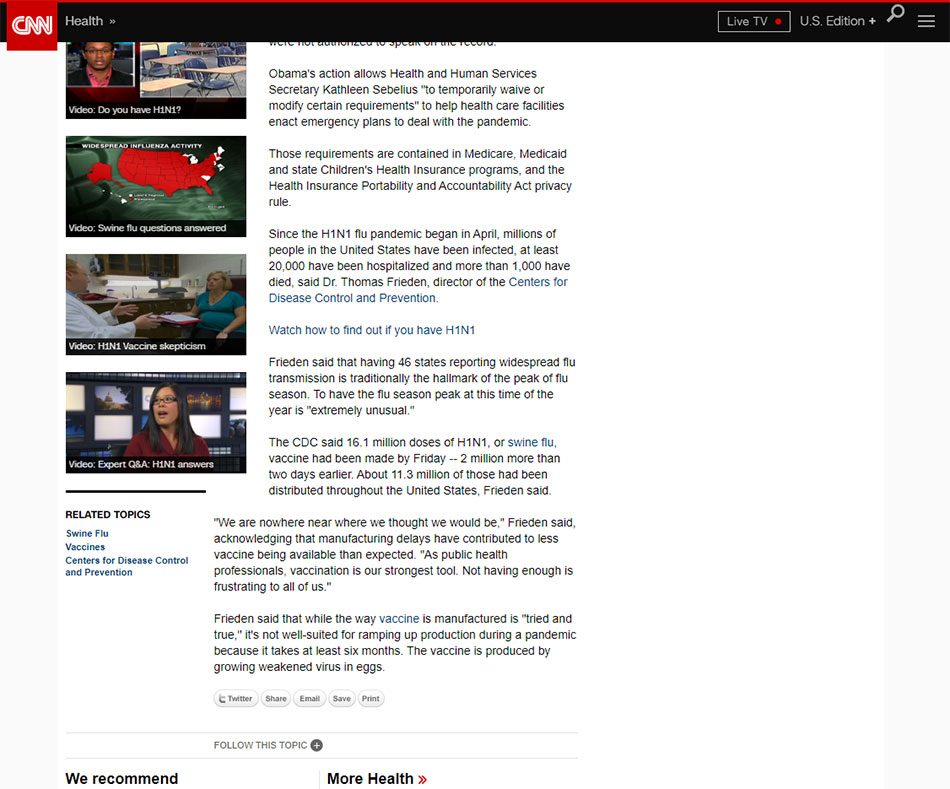 Another administration official said the move is “not tied to the current case count” and “gives the federal government more power to help states” by lifting bureaucratic requirements — both in treating patients and moving equipment to where it’s most needed.

Since the H1N1 flu pandemic began in April, millions of people in the United States have been infected, at least 20,000 have been hospitalized and more than 1,000 have died, said Dr. Thomas Frieden, director of the Centers for Disease Control and Prevention.

“We are nowhere near where we thought we would be,” Frieden said, acknowledging that manufacturing delays have contributed to less vaccine being available than expected. “As public health professionals, vaccination is our strongest tool. Not having enough is frustrating to all of us.” READ MORE