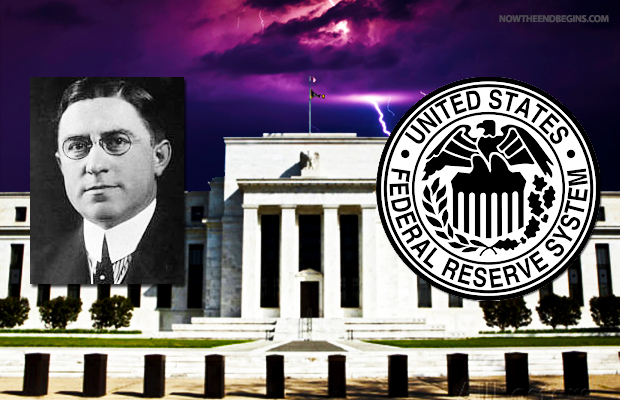 “Mr. Chairman, we have in this Country one of the most corrupt institutions the world has ever known. I refer to the Federal Reserve System, hereinafter called the Fed.”

“I am a most unhappy man. I have unwittingly ruined my country. A great industrial nation is controlled by its system of credit. Our system of credit is concentrated. The growth of the nation, therefore, and all our activities are in the hands of a few men. We have come to be one of the worst ruled, one of the most completely controlled and dominated Governments in the civilized world no longer a Government by free opinion, no longer a Government by conviction and the vote of the majority, but a Government by the opinion and duress of a small group of dominant men.” – President Woodrow Wilson, speaking about his regret on creating the Federal Reserve System

83 years ago, Congressman Louis T. McFadden gave a passionate speech on the House floor, warning America of the peril it faced from the Federal Reserve System which was established on December 23, 1912. The Federal Reserve System is, among many things, quite in violation of the Constitution of the United States. Thomas Jefferson argued that Congress has no authority to create a bank and give it a monopoly over our money, because such actions “are not among the powers specially enumerated” in the Constitution. I agree. The Constitution plainly designates the people’s elected representatives as the guardians of their money (“Congress shall have Power…To coin Money, [and] regulate the value thereof…”—Article I, Section 8.)

What Congressman McFadden warned against in 1932 has become a cryptic reality in 2015. The Fed today is unaccountable, unauditable, and unstoppable as the main source of power in this country. Forbes magazine, speaking about the Fed, had this to say:

“It is anomalous that there should be such a powerful, unrestrained institution as the Fed in our body politic. The Fed’s centennial is nothing to celebrate. Instead, this institution of awesome, arbitrary powers makes a mockery of constitutional checks and balances. It poses a threat, not just to our currency and economic well-being, but to liberty itself. It’s a tragedy that this institution has lasted as long as it has.”

Here now is Congressman McFadden’s 1932 warning to America regarding the Federal Reserve System:

“Mr. Chairman, we have in this Country one of the most corrupt institutions the world has ever known. I refer to the Federal Reserve Board and the Federal Reserve Banks, hereinafter called the Fed. The Fed has cheated the Government of these United States and the people of the United States out of enough money to pay the Nation’s debt. The depredations and iniquities of the Fed has cost enough money to pay the National debt several times over.

“In 1912 the National Monetary Association, under the chairmanship of the late Senator Nelson W. Aldrich, made a report and presented a vicious bill called the National Reserve Association bill. This bill is usually spoken of as the Aldrich bill. Senator Aldrich did not write the Aldrich bill. He was the tool, if not the accomplice, of the European bankers who for nearly twenty years had been scheming to set up a central bank in this Country and who in 1912 has spent and were continuing to spend vast sums of money to accomplish their purpose.”

“This evil institution has impoverished and ruined the people of these United States, has bankrupted itself, and has practically bankrupted our Government. It has done this through the defects of the law under which it operates, through the maladministration of that law by the Fed and through the corrupt practices of the moneyed vultures who control it.

“Some people who think that the Federal Reserve Banks are United States Government institutions. They are private monopolies which prey upon the people of these United States for the benefit of themselves and their foreign customers; foreign and domestic speculators and swindlers; and rich and predatory money lender. In that dark crew of financial pirates there are those who would cut a man’s throat to get a dollar out of his pocket; there are those who send money into states to buy votes to control our legislatures; there are those who maintain International propaganda for the purpose of deceiving us into granting of new concessions which will permit them to cover up their past misdeeds and set again in motion their gigantic train of crime.

“These twelve private credit monopolies were deceitfully and disloyally foisted upon this Country by the bankers who came here from Europe and repaid us our hospitality by undermining our American institutions. Those bankers took money out of this Country to finance Japan in a war against Russia. They created a reign of terror in Russia with our money in order to help that war along. They instigated the separate peace between Germany and Russia, and thus drove a wedge between the allies in World War. They financed Trotsky’s passage from New York to Russia so that he might assist in the destruction of the Russian Empire. They fomented and instigated the Russian Revolution, and placed a large fund of American dollars at Trotsky’s disposal in one of their branch banks in Sweden so that through him Russian homes might be thoroughly broken up and Russian children flung far and wide from their natural protectors. They have since begun breaking up of American homes and the dispersal of American children. “Mr. Chairman, there should be no partisanship in matters concerning banking and currency affairs in this Country, and I do not speak with any.

“In 1912 the National Monetary Association, under the chairmanship of the late Senator Nelson W. Aldrich, made a report and presented a vicious bill called the National Reserve Association bill. This bill is usually spoken of as the Aldrich bill. Senator Aldrich did not write the Aldrich bill. He was the tool, if not the accomplice, of the European bankers who for nearly twenty years had been scheming to set up a central bank in this Country and who in 1912 has spent and were continuing to spend vast sums of money to accomplish their purpose.

“We were opposed to the Aldrich plan for a central bank. The men who rule the Democratic Party then promised the people that if they were returned to power there would be no central bank established here while they held the reigns of government. Thirteen months later that promise was broken, and the Wilson administration, under the tutelage of those sinister Wall Street figures who stood behind Colonel House, established here in our free Country the worm-eaten monarchical institution of the “King’s Bank” to control us from the top downward, and from the cradle to the grave.

“The Federal Reserve Bank destroyed our old and characteristic way of doing business. It discriminated against our 1-name commercial paper, the finest in the world, and it set up the antiquated 2-name paper, which is the present curse of this Country and which wrecked every country which has ever given it scope; it fastened down upon the Country the very tyranny from which the framers of the Constitution sough to save us.”