1,049 Injured and 3 DEAD in Israeli Embassy Attack in Cairo 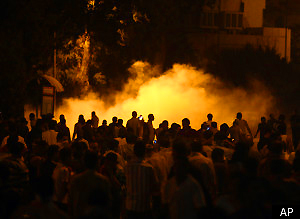 were on high alert Saturday after protesters tried to break into Israel’s embassy in Cairo again this morning after the previous night’s attack. Order was restored to the area Saturday morning, although small groups still lingered near the embassy, according to Al Jazeera.

One news website earlier in the day had suggested he might offer his resignation over the violence that led to the Israeli ambassador flying out of Cairo to Israel.

Israel’s ambassador to Egypt and senior staff were evacuated on Saturday following the mass demonstration in Cairo Friday night in which hundreds of Egyptians stormed the building housing Israel’s mission and threw embassy documents and its national flag from windows.

A diplomat was left behind to maintain the embassy, an Israeli official said. The diplomat, identified as the consul for state affairs and Ambassador Yitzhak Levanon’s deputy, will remain in Egypt while Israel weighs a response to the overnight demonstrations, the official said. source – JPost