“We are all Muslims,” says Mayor Bloomberg to Ramadan Muslim audience

“We are all Muslims,” says Mayor Bloomberg to Ramadan Muslim audience. In his his remarks, Bloomberg, who has previously supported the Park51 project in the name of both property... 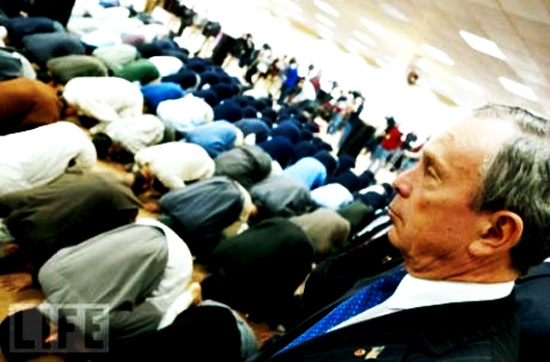 Now that Mayor ‘Dhimmi’ Bloomberg has sold his soul to the Muslims on behalf his financial interests* in the Middle East, he kicks the rest of America in the teeth just as his Muslim ‘brothers’ did on 9/11.

Michael Bloomberg shamed those who oppose the Ground Zero Victory Mosque and told a Ramadan audience this week, “We are all Muslims.”

We are now in the Islamic holy month of fasting called Ramadan, and Bloomberg hosted last night an annual iftar, or fast-breaking dinner, at Gracie Mansion.

In his his remarks, Bloomberg, who has previously supported the Park51 project in the name of both property rights and religious freedom, once again spoke truth to fear and hatred. He admitted that “there are people of good will on both sides of the debate.” He acknowledged that the World Trade Center site is “hallowed ground.” And he observed that “there are people of every faith–including, perhaps, some in this room–who are hoping that a compromise will end the debate.”

The community center can and must be built at the Park51 site, he said. Anything less would “compromise our commitment to fighting terror with freedom.”

Bloomberg brought home the point that the propaganda war now being waged on Islam in America threatens to undercut our counterinsurgency battle for “hearts and minds” in Iraq and Afghanistan. “If we do not practice here at home what we preach abroad–if we do not lead by example–we undermine our soldiers,” he said. “We undermine our foreign policy objectives. And we undermine our national security.”

Bloomberg ended his talk by quoting some words from the embattled (LYING) Imam Feisal Abdul Rauf:

At an interfaith memorial service for the martyred journalist Daniel Pearl*, Imam Rauf said, ‘If to be a Jew means to say with all one’s heart, mind, and soul: Shma` Yisrael, Adonai Elohenu Adonai Ehad; Hear O Israel, the Lord our God, the Lord is One, not only today I am a Jew, I have always been one. If to be a Christian is to love the Lord our God with all of my heart, mind and soul, and to love for my fellow human being what I love for myself, then not only am I a Christian, but I have always been one.’ H/T wtd source – Bare Naked Islam