As the U.S. and several Eastern European NATO countries conduct a series of military exercises near Russia's border, Russian President Vladimir Putin has ordered his Northern Fleet "to full... 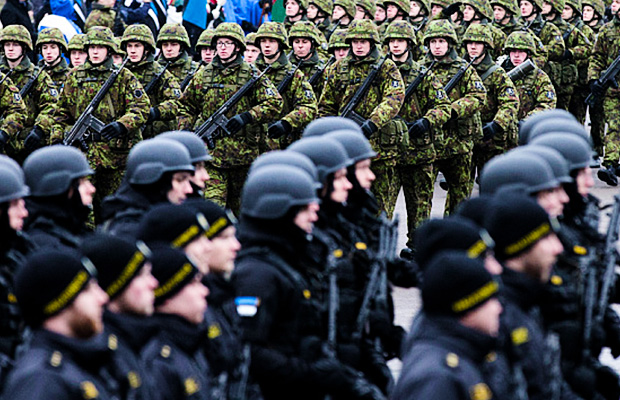 Nato forces put on a show of strength within yards of Estonia’s Russian border, with armoured personnel carriers, tanks and 1,300 Estonian soldiers forming a military parade. The parade, which also included 100 troops from Britain and other European nations, followed warnings from David Cameron on Tuesday that the Baltics could be next in Russia’s sights for a Crimea-style annexation.
by Geri Ungurean March 25, 2015
NOW THE END BEGINS SHARE:

Vladimir Putin has been more than a bit provocative of late, ratcheting up the rhetoric, but also engaging his troops in war exercises. He is showing the whole world his military prowess, and that he is ready and willing to use it.

“For nation shall rise against nation, and kingdom against kingdom: and there shall be famines, and pestilences, and earthquakes, in divers places. All these are the beginning of sorrows.” Matthew 24:7-8 (KJV)

Putin also told many news sources that using his nuclear capabilities during the Ukraine crisis was not out of the question. He said that he thought he was going to have to use nukes at one point. America is now on European soil along with several NATO countries.

As the U.S. and several Eastern European NATO countries conduct a series of military exercises near Russia’s border, Russian President Vladimir Putin has ordered his Northern Fleet “to full alert in a snap combat readiness exercise” in the Arctic, state-run media reported Monday. At least one Russian leader described the drill as routine and unrelated to the “international situation.”

NATO forces put on a show of strength within yards of Estonia’s Russian border, with armored personnel carriers, tanks and 1,300 Estonian soldiers forming a military parade. The parade, which also included 100 troops from Britain and other European nations, followed warnings from David Cameron on Tuesday that the Baltics could be next in Russia’s sights for a Crimea-style annexation.

The drills will run through Friday, Sputnik reported. A flotilla of minesweepers will support the Northern Fleet’s nuclear submarines in the Barents Sea as part of the drill, the Tass news agency reported, citing a Defense Ministry statement.

The ships will conduct magnetic, acoustic and contact demining sweeps during the drill, Tass reported. Despite a number of countries participating in various military drills in Eastern Europe, a Kremlin spokesman described the Northern Fleet inspection as routine practice aimed at improving military capabilities.

“The practice of snap checks will become regular, as it is beneficial for improving the mechanisms of control and operation of the armed forces. This is an absolutely regular process of the armed forces’ operation, of preparation and development of Russia’s armed forces,” Dmitry Peskov told Tass on Monday. Conversely, a diplomat told Tass that Russia was “deeply concerned” about NATO drills near its border.

“It is especially surprising that this is happening in Northeastern Europe, which is the most stable region not only on our continent, but also maybe in the whole world,” Russian Deputy Foreign Minister Alexey Meshkov said. “Such NATO actions lead to destabilization of the situation and increasing tensions in Northeastern Europe.”

Among the recent drills in Eastern Europe:

The U.S. Air Force moved a dozen A-10 Thunderbolt “tankbuster” attack jets to an air base in Germany and the U.S. military placed hundreds of tanks and military vehicles in Latvia, where they’ll be matched up with 3,000 troops from Fort Stewart, Georgia. [1] – source

The U.S. flexes its muscle:

“An intercontinental ballistic missile was fired early Monday from a facility in California, the US Air Force announced, saying the tests were a message to the world about Washington’s nuclear capabilities. The Minuteman III missile was fitted with a “test re-entry vehicle” instead of a live thermonuclear warhead, and was test-launched from Vandenberg Air Force Base (AFB) in California at 03:36 local time (10:36 GMT), according to the Air Force statement.”

“With these launches, we not only verify our processes and the ICBM (intercontinental ballistic missile) weapon system, we provide a visual to the world that the Minuteman III is capable of striking pretty much anywhere with extreme precision,” said Lt. Col Tytonia Moore of the 90th Missile Wing, based out of the Francis E. Warren AFB in Wyoming, according to the statement. [2] – source

US and NATO Presence in Baltic States

Hundreds of US armored vehicles have been arriving in Latvia, with thousands of troops to follow. The deployment comes amid efforts to reassure Baltic states – wary of Moscow’s intentions amid the Ukraine crisis – and after Russia’s full withdrawal from a European arms control pact, signed in 1990.

“We are disappointed by Russia’s decision to suspend the participation in the Joint Consultative Group of the Conventional Armed Forces Treaty in Europe,” NATO Secretary General Jens Stoltenberg told reporters on Wednesday.

“We still support all efforts to have arms control and we believe that the treaty is important.” The US deployment in Europe is part of the American army’s “Operation Atlantic Resolve”: aimed at demonstrating commitment to NATO allies Latvia, Lithuania and Estonia, all former Soviet territories. The Baltic states are increasingly worried about Moscow’s next move following Russia’s annexation of Crimea and support for pro-Russian rebels in Ukraine. [3] – source

North Korea on the brink yet again

SEOUL, South Korea –  North Korean state media said Monday that Pyongyang had carried through with a threat to cancel the 60-year-old armistice that ended the Korean War, as it and South Korea staged dueling war games amid threatening rhetoric that has risen to the highest level since North Korea rained artillery shells on a South Korean island in 2010.

Enraged over the South’s joint military drills with the United States and recent U.N. sanctions, Pyongyang has piled threat on top of threat, including vows to launch a nuclear strike on the U.S. Seoul has responded with tough talk of its own and has placed its troops on high alert.

The North Korean government made no formal announcement Monday on its repeated threats to scrap the armistice, but the country’s main newspaper, Rodong Sinmun, reported that the armistice was nullified Monday as Pyongyang had earlier announced it would.

The North followed through on another promise Monday, shutting down a Red Cross hotline that the North and South used for general communication and to discuss aid shipments and separated families’ reunions.

Russia called for a ban on American nuclear weapons in parts of Europe, saying the U.S. is breaking an international agreement by holding joint nuclear training missions with NATO allies that don’t possess such weapons.

Using ships and airfields as well as training crews from non-nuclear states from the North Atlantic Treaty Organization in such exercises is “in direct contradiction to the letter and spirit” of the Nuclear Non-Proliferation Treaty, or NPT, ministry spokesman Alexander Lukashevich said in a statement on its website.

“There can be only one solution,” Lukashevich said. Russia is calling for “the return of all nonstrategic nuclear weapons” to U.S. territory as well as “a ban on stationing them abroad, elimination of infrastructure for their rapid deployment, and denial of training for the preparation and use of nuclear weapons” by the militaries of non-nuclear states. [5] – source

From where I stand, it looks as if a World War could erupt at any time. Add ISIS and Al Qaeda to the mix, and this could explode into an World War like this earth has never experienced.