SHOCK! Obama Admin Admits To Spying On Our Euro Allies

As outrage grew across the EU over the damaging revelations, German Chancellor Angela Merkel was first to lash out, declaring that 'bugging friends is unacceptable' before French premier Francois... 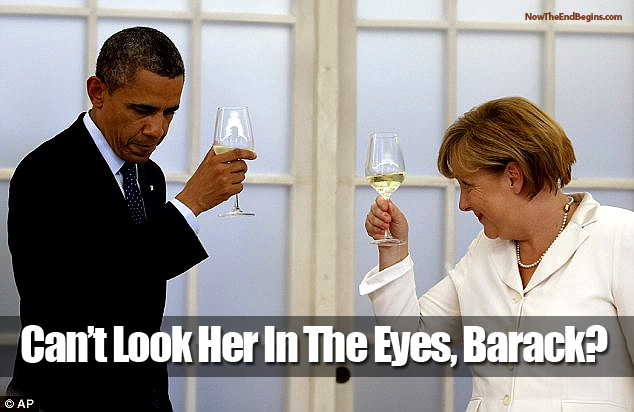 Avoid eye contact: Angela Merkel said, if true, 'spying on friends is unacceptable' just a week after she and US President Barack Obama shared a glass of wine during his visit to Berlin
by Geoffrey Grider July 1, 2013
NOW THE END BEGINS SHARE:

The US spying scandal deepened today as Secretary of State John Kerry said it is ‘not unusual’ for governments to bug the offices of their allies sparking fierce retorts from France and Germany.

The extraordinary statement has angered leaders across the world after leaked documents revealed America spied on 38 foreign missions and embassies including the European Union’s Washington nerve centre.

Avoid eye contact: Angela Merkel said, if true, ‘spying on friends is unacceptable’ just a week after she and US President Barack Obama shared a glass of wine during his visit to Berlin

As outrage grew across the EU over the damaging revelations, German Chancellor Angela Merkel was first to lash out, declaring that ‘bugging friends is unacceptable’ before French premier Francois Hollande demanded its ‘immediate halt’.

The document also lists the large range of spying methods used to infiltrate the ‘targets’ including bugging phones, tapping cables and intercepting transmissions with far-reaching antennae.

Speaking to a press conference today, Kerry said: ‘I will say that every country in the world that is engaged in international affairs and national security undertakes lots of activities to protect its national security and all kinds of information contributes to that. All I know is that is not unusual for lots of nations.

But the remarks did not wash with Francois Hallande who demanded an immediate explanation, adding: ‘We cannot accept this kind of behavior.

‘We demand that this cease immediately.’ He asked for an immediate explanation.

Angela Merkel waded into the row, saying: ‘If it is confirmed that diplomatic representations of the European Union and individual European countries have been spied upon, we will clearly say that bugging friends is unacceptable.

‘We are no longer in the Cold War.’

He told France 2: ‘I was always sure that dictatorships, some authoritarian systems, tried to listen … but that measures like that are now practiced by an ally, by a friend, that is shocking, in the case that it is true.’

Spooks at the National Security Agency (NSA) nobbled EU internal computer networks in Washington and at the 27-member bloc’s UN office in New York, according to Germany’s Der Spiegel magazine.

Microphones were installed in the building and and the computer network compromised, ‘giving the agency access to emails and internal documents.’

One of the documents, revealed by The Guardian, reportedly pinpoints 38 embassies and missions which it refers to as ‘targets’.

The aim, it suggests, is to uncover inside knowledge of policy disagreements on global issues and other schisms between member states. The document, dated September 2010 and classified ‘strictly confidential’, has created a diplomatic rift between America and Europe. source – Daily Mail UK