Saudis and Gulf States On WAR ALERT for US Iran Clash

The armies of Saudi Arabia and fellow Gulf Cooperation Council states stood ready Thursday Jan. 5, for Washington to stand up to Iranian threats and send an aircraft carrier... 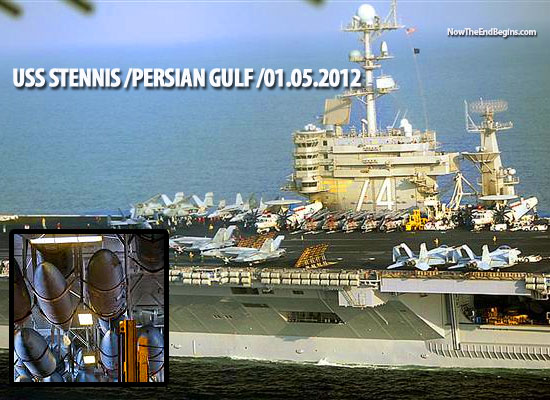 The USS Stennis as it patrols the Persian Gulf January 2012
by Geoffrey Grider January 5, 2012
NOW THE END BEGINS SHARE:

The drums of war grow ever louder

RELATED STORY: US To Deploy Troops and Warships In Israel For War With Iran

The armies of Saudi Arabia and fellow Gulf Cooperation Council states stood ready Thursday Jan. 5, for Washington to stand up to Iranian threats and send an aircraft carrier or several warships through the Strait of Hormuz into the Persian Gulf. Riyadh has been leaning hard on the Obama administration not to let Tehran get away with its warning to react with “full force” if the USS Stennis aircraft carrier tried to reenter the Gulf or Iran’s pretensions to control the traffic transiting the world’s most important oil route.

The USS Stennis as it patrols the Persian Gulf January 2012

Debkafile’s Washington sources report that Saudi Arabia has warned the Obama administration that Iranian leaders mean what they say; their leaders are bent on provoking a military clash with the United States at a time and place of their choosing, rather than leaving the initiative to Washington. To this end, Iranian officials are ratcheting up their belligerence day after day.
Notwithstanding their military inferiority, the Iranians believe they can snatch a measure of success from a military confrontation, just as the Lebanese Hizballah did in the 2006 war against Israel. In any case, they expect any clash to be limited – at least at first. The two sides will begin by feeling for the opposite side’s weaknesses while endeavoring to hold the line against a full-blown war.

America’s failure to rise to Iran’s challenge will confirm its rulers in the conviction that the US is a paper tiger and encourage them to press their advantage for new gains.
The assessment of British military experts Thursday, Jan. 5, was that the question now is: Who will blink first? Will the US follow through on the Pentagon’s assertion that the deployment of US military assets in the Persian Gulf will continue as it has for decades? Or will Iran act on its warnings and block those waters to the entry of American warships?

President Barack Obama can’t afford to cave in to Iran, especially while campaigning for reelection in Nov. 2012; Tehran, for its part, has made too many threats to easily back down.
The entire region is now on tenterhooks for the next move, with US, Iranian and Gulf armies on the highest war alert. American and Iranian war planners both accept that their advantage lies in surprising the enemy – without, however, catapulting the Persian Gulf into a full-dress war.

US Navy publications as of Wednesday, Jan. 4 showed a sign of the times: One ran a series of photos of F-18 Super Hornet fighter-bombers standing on the runways of the USS Stennis aircraft carrier ready for takeoff at any moment. Another depicted for the first time ever row upon row of huge bombs in the carrier’s hold to show the Iranians what they are taking on.

In the view of debkafile’s military sources, the fact that the US has deployed only one large aircraft carrier in the region does not signify any reluctance on Washington’s part to preserve the freedom of navigation in the Strait of Hormuz and the Persian Gulf. There is no longer a need to rush more carriers to a flashpoint in these strategic waters. The US maintains five huge air bases in the Gulf region – two, the Ali Al Salem and Ahmed Al Jaber bases, in Kuwait; the Al Dhafra base in the UAE; and the largest air bases outside the US – Al Adid in Qatar and the Thumrait in Oman.

The concentration of aircraft carriers at any given location is no longer treated as the marker of an imminent US military operation. source – DEBKA