Rockets Fired From Gaza Continue To Fall As Israel Retaliates

Palestinians kept up rocket fire against southern Israel on Monday in a fourth day of hostilities in which 23 Palestinians have been killed. "If the Qassam (rocket) fire ends,... 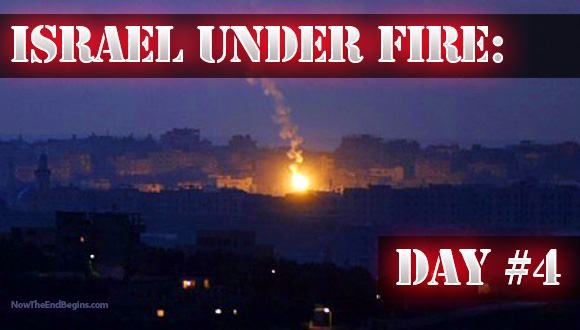 GAZA (Reuters) – Israel launched more air strikes in the Gaza Strip and Palestinians kept up rocket fire against southern Israel on Monday in a fourth day of hostilities in which 23 Palestinians have been killed.

The rockets continued on Monday to fall on southern Israel from the Gaza Strip.

Egyptian efforts to broker a ceasefire appeared to be stuck over a demand by the Islamic Jihad militant group that Israel first promise not to target militant leaders for future attack.

A 15-year-old Palestinian youth died in an explosion that Palestinians blamed on an Israeli missile. The Israeli military denied it had carried out a strike. A Reuters cameraman at the scene, where militants had been launching rockets toward Israel, saw no signs of impact or of shrapnel.

More than 30 rockets, seven of them intercepted by Israel’s Iron Dome anti-missile system, were fired at Israel, causing no casualties, police said.

Eighteen of the Palestinians killed since fighting flared on Friday were identified by medical officials as militants and five as civilians. At least 74 Palestinians, mostly civilians, and three Israelis have been wounded in the past four days.

The violence has been following a familiar pattern in which militants launch rocket attacks and Israel carries out air raids in the Hamas-controlled enclave. But the bloodshed has usually ended after a few days with an informal truce.

Though serious, few in Israel expect the flare-up to lead to a ground assault reminiscent of the 2008-2009 Gaza war in which some 1,400 Palestinians and 13 Israelis were killed.

Gaza’s Hamas leadership, whose own cadres have kept out of the fighting, said on Sunday neighboring Egypt was working to stop the violence and was consulting with other militants. A Palestinian official close to the mediation told Reuters Israel had agreed to a midnight ceasefire. But Islamic Jihad, an Iranian-backed faction behind most of the rocket fire, had baulked, insisting that any truce include an undertaking by Israel “to end assassinations”.

Two chiefs of the Popular Resistance Committees (PRC) faction, accused by Israel of planning to attack it via Egypt’s Sinai desert, were killed in an Israeli strike on Friday. Israel signaled no end to what it calls “preventive targeting” operations.

He confirmed there had been contact with Egyptian mediators.

Palestinian attacks against Israel have disrupted normal life in the south and forced many schools to close on Sunday and Monday. Alerts to residents of southern towns to take shelter from incoming rockets punctuated radio programs.

Islamic Jihad and the PRC, armed groups largely independent of Islamist Hamas, have said they fired most of the scores of rockets launched at Israel since Friday.

Some experts in Gaza believe Hamas had provided some smaller groups with ammunition but avoided direct participation in the fighting out of concern Israel would step up its attacks in the enclave.

Hamas is also eager to avoid any long-term military campaign as it struggles to adapt to political upheaval in Arab countries such as Egypt, which shares a border with Gaza, and in Syria, where the group has abandoned its traditional headquarters.

“For now, it (fighting) is on this kind of scale. But if it will prove protracted, then without a doubt there will be a powerful, painful blow so that this will not continue.”

The violence has raised international concern.

France called for “an instant return to calm and restraint in order to avoid an escalation which would risk once again harming civilians”. Russia urged an end to the fighting and said “the use of any violence from which the civilian population suffers is totally unacceptable”. Gaza, home to 1.7 million people, was under Israeli occupation from 1967 until 2005 and remains under blockade.

Hamas has controlled Gaza since 2007 and is fighting for an independent Palestinian state but has shunned the stalled peace process supervised by international powers and refuses to recognize the Jewish state. Islamic Jihad is less influential than Hamas but shares the same ideology, which advocates Israel’s ultimate destruction. source – Yahoo News