In 1973 the American Psychiatric Association declassified homosexuality as a mental disorder. Since then, there has been a slow, progressive move toward making LGBT more and more mainstream. Now they have taken over the stream and are trying to drown anyone who is straight, Christian, and disagrees with them.

When gay marriage was legalized in so many states, my concern turned to other perversions — especially pedophilia.

EDITOR’S NOTE: When the Gay Movement began it’s ascent to power, they realized pretty quickly that they did not have enough members in their ranks, with homosexual population in America being less than 5%. So they began to add various other perversions, forming the umbrella group that has become the LGBT. In the past year, they have been experimenting with adding the ‘Q’, which stands for queer. By the time they’re done, they will have also added a ‘P’,  for pedophile.

“Who knowing the judgment of God, that they which commit such things are worthy of death, not only do the same, but have pleasure in them that do them.” Romans 1:32 (KJV)

If the unnatural and perverted act of homosexuality, spoken of clearly in the Word of God as an abomination unto the Lord, what would keep the pedophiles from jumping on that same band wagon, claiming that their’s too is just an alternate lifestyle?

Back in the 70’s and 80’s, pedophilia was considered by doctors to be a mental disorder, but so was homosexuality! Can you see the slippery slope effect coming into play?

“Since when is a crime a disability?” asked Jeff Herrity. His son, Brian was a victim of child molestation by Catholic priest, Gil Gustafson from 1977 to 1982, Brian was ten years old when the abuse began. “If that is the case, everyone in prison should be disabled”, said Herrity. This was thirty years ago, in 1983, Gustafson was convicted of molesting Brian and was sentenced to a forty dollar fine, ten years of probation, and six months in jail, he only served four and a half months and was released. The abuse “mentally and physically destroyed” him. 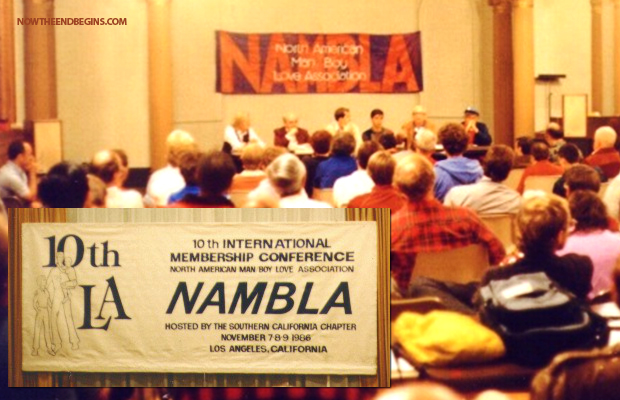 Brian died in 1995 at 28. It is estimated that Gustafson abused between four and fifteen victims. In 2002, Officials in Rome sentenced Gustafson to a life of prayer and penance. In July of 2006, Gustafson was declared disabled and collects disability checks in addition to the support the Pension for Priests gives him.

Gustafson also runs his own ‘Leadership’ consulting firm and the church nudges clients his way. So, disability, a church pension, and his own firm, yeah, he’s living the life of a frugal priest, pardon me, ex, child molesting priest.

An assist professor at Rutgers University of Law is saying that pedophilia should be protected by the Americans with Disabilities Act of 1990 and Section 504 of the Rehabilitation Act of 1973. The people with the mental disorder pedophilia should not be discriminated against, because they were possibly abused as children.

She also claims that pedophilia might possibly be genetic, neurochemical, or neuroanatomic. There have been some clear distinctions made between pedophilia and child molestation. Pedophilia is the sexual attraction to prepubescent children, that is not acted upon. It is just the desire.

However, if a pedophile acts on his/her sexual desires, then it becomes child molestation, therefore, a crime. Most people use the terms interchangeably, but there is a difference.

Controversy Over Push to Redefine Pedophilia

In 1973 the American Psychiatric Association declassified homosexuality as a mental disorder. Since then, there has been a slow, progressive move toward making LGBT more and more mainstream. Now they have taken over the stream and are trying to drown anyone who is straight, Christian, and disagrees with them. If God meant for us to bang anything, we would all have both working parts. Having a government that promotes the militant LGBT agenda, particularly by not defining sexual orientation, is making it easier to introduce pedophilia as a sexual orientation and not a sexual deviancy. In 2003, a group of mental health professionals formed a group called to redefine pedophilia as a sexual orientation, calling them ‘minor attracted people’ or MAP.

Their goal is to get MAPS protected under the same laws as LGBT. There is an underlying progression to sexualize children at younger and younger ages by promoting the idea that normal friendships are actually sexual attraction. Once that idea is accepted, pedophilia will be accepted. I guess pedophilia will be removed as a mental disorder and they will lose their disability status.” [1] – source

Do they not factor in all the children who are harmed and scarred for life, when they consider making pedophilia normal and culturally acceptable? It brings to mind the pro-death crowd, whose mantra has always been “It’s our body, we can do what we want with it!” But to that I’ve always rebutted that when a woman becomes pregnant, there are two bodies, not one!

In the same way, the pedophiles feel that they were born to desire pre-pubescent children in a sexual way. They care not about the children — only about themselves.”

I do hope and pray that our Lord Jesus comes to get His church away from this wasteland of sin and abominations.

And as in the time of Noah, people on earth – oblivious to God — are eating and drinking and have no thought for tomorrow. They do not realize that the only safe place to be is in Jesus Christ our Savior.