Obama Gov’t Refuses To Recognize Jerusalem As Part Of Israel

The Obama State Department refuses to recognize Jerusalem as being in Israel.... 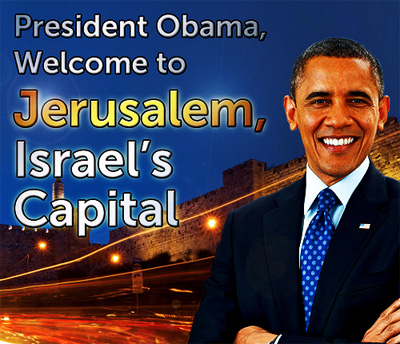 What a week it has been for Jerusalem

The President of the United States arrived, transformed the King David Hotel into his (and his entourage’s) home away from home, and then began a series of meetings and visits – to the official residences of President Shimon Peres and Prime Minister Bibi Netanyahu, to the Israel Museum and the Shrine of the Book, to the Jerusalem Convention Center, to Mount Herzl, Yad Vashem, and to the grave of former Prime Minister Yitzchak Rabin.  All of these sites are in Jerusalem.  But are they in Israel?

According to the U.S. State Department they are not.  The State Department refuses to recognize Jerusalem as being in Israel and says that the city’s status must be determined in future peace negotiations.

My father, Nathan Lewin, and I were in court this week – the day before President Obama arrived in the Middle East – on a case that concerns this very issue.  The case is Zivotofsky v. Secretary of State, and it involves the right of a Jerusalem-born American citizen to self-identify as born in “Israel” on his or her U.S. passport and birth certificate.

Most people do not know that the State Department permits American citizens who wish to remove any reference to “Israel” from their passports to do so.  For example, American citizens born in Tel Aviv or in Haifa may choose to list their place of birth as “Tel Aviv” or “Haifa” instead of “Israel” if they are offended by having “Israel” listed on their passports.  The U.S. also permits “West Bank,” “Gaza Strip,” and “Palestine” (for those born before 1948) to be listed as “place of birth” on a U.S. passport.  The State Department refuses to be equally accommodating to individual convictions, however, when it prohibits American citizens born in Jerusalem to list “Israel” as their place of birth.

In 2002, Congress passed a law that directed the Secretary of State to record the birthplace of American citizens born in Jerusalem as “Israel” on the U.S. passports and birth certificates of those who so request.  Since the bill’s enactment, the Executive Branch has refused to enforce the law, claiming that to do so would infringe on the President’s authority to “recognize foreign sovereigns.”

Our client, Menachem Binyamin Zivotofsky, was born in October 2002 in Shaare Zedek hospital (just a few weeks after the law was enacted).  His parents invoked the new statute and asked that his place of birth be listed as “Israel.”  The State Department refused because it claimed that Congress’ law was unconstitutional, and it listed his place of birth as “Jerusalem.”  Zivotofsky then became our firm’s youngest pro bono client when he (and his parents) sued in September 2003 to compel the State Department to comply with the law. Read the rest of the story at Brandeis Center