The presidents of Turkey and the U.S. will open the Turkish-American Culture and Civilization Center in Maryland, Turkey’s foreign minister said Sunday.... 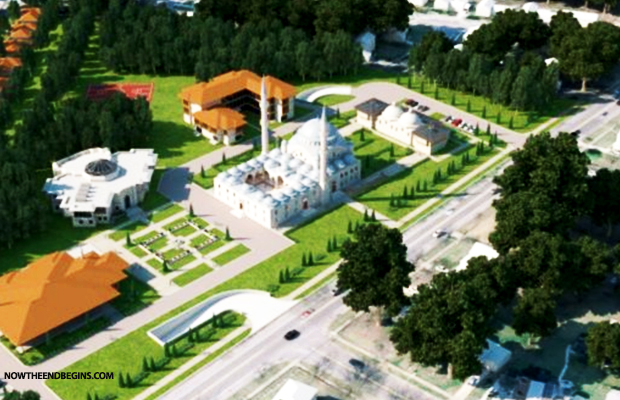 He will be at the opening of the $100 million dollar mega mosque in Lanham, MD with Erdogan — only about 1/2 hour from our home.

From his apology tour to the Middle East, to his fake Arab Spring to destabilize the region, to take out secular governments and replace them with Islamic regimes, it is crystal clear! You have to be blind not to see this.

“A couple of years ago it was reported that Turkey was helping fund the building of a $100 million dollar mega mosque in Lanham, Maryland. In fact Erdogan visited the mosque when he was here in May of 2013, promising to come back for the opening.

Well that time has apparently arrived and now Erdogan and Obama will be together at the mosque for the big opening ceremony:

The presidents of Turkey and the U.S. will open the Turkish-American Culture and Civilization Center in Maryland, Turkey’s foreign minister said Sunday.

Mevlut Cavusoglu, on a three-day visit to Washington, visited the center that also has a middle-sized mosque, and lunched with representatives from the American Muslim community.

“During a phone call, President Recep Tayyip Erdogan asked President (Barack) Obama to accompany him in opening the center together and President Obama accepted his offer’in principle,’” Cavusoglu told the representatives.

If Obama’s schedule allows at the time of the opening, he will accompany Erdogan.”

Father I pray for America. I pray for those who love You and Your Holy Word. After reading this piece, I hope and pray that there will be no nay sayers left, that Obama is a Christian and that he is not infiltrating the US with Muslims. It’s as clear as it could possibly be.