Russia has set up military bases in Syria, and Iran is fighting Israel by proxy with Hamas, but Obama still has time to call for support for the "religion... 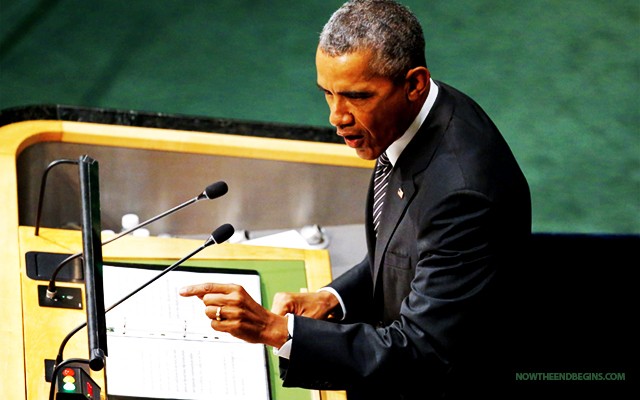 Interesting to note that while Bible prophecy clearly mentions Russia, Iran and China, the world’s greatest superpower America gets no mention at all.

Russia has set up military bases in Syria, and Iran is fighting Israel by proxy with Hamas, but Obama still has time to call for support for the “religion of peace” Islam. He said there must be a “rejection by non-Muslims of the ignorance that equates Islam with terrorism.” Sorry, Barry, but it is intelligence and discernment that equates Islam with terrorism, not “ignorance”. He also went on to say that America is increasing the amount of Muslim migrants we are planning on taking in.

Then, while criticising Russia for violating Syria’s sovereignty by coming in and setting up a military presence, Obama then called for “regime change” by “removing Assad from power” in order to “set up a new government”. Lol, so he is not actually against violating any nation’s sovereignty so long as he is the one who gets to do the violating.

What he failed to mention was that under his leadership, America is being badly outmaneuvered by a rising, aggressive Russia, and that Vladimir Putin is beating him at every turn. The entire balance of power in the Middle East is now shifting, primarily due to the newly-formed axis of power by Russia, Iran and China. The world needs to come to grips with the sobering thought that Russia, and not America, is now in charge of the Middle East. Obama had every minute of the last 2 and a half years to do something about Syria, and because he did nothing, Russia has now stepped in and taken control.

Interesting to note that while Bible prophecy clearly mentions Russia, Iran and China, the world’s greatest superpower America gets no mention at all. I think we are beginning to see one of the reasons for that. Perhaps God has allowed Barack Obama to be be president of America to bring that to come to pass. Certainly starting to look that way.

We will continue to bring you meaningful updates of all the shenanigans at the United Nations this week as they occur, so stay tuned…