70 years after the end of WWII, antisemitism around the world is on the rise on eve of Holocaust Remembrance Day “And he shall set up an ensign for the... 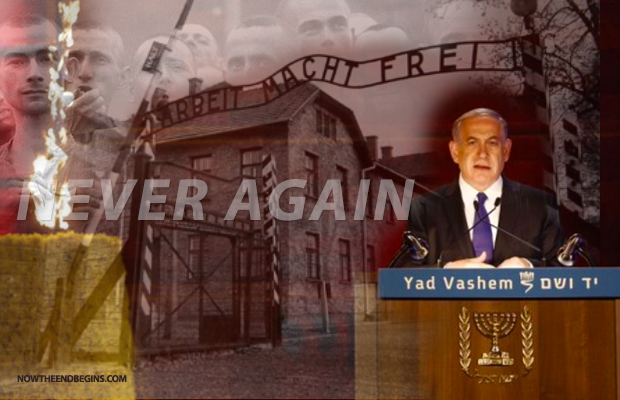 70 years after the end of WWII, antisemitism around the world is on the rise on eve of Holocaust Remembrance Day

“And he shall set up an ensign for the nations, and shall assemble the outcasts of Israel, and gather together the dispersed of Judah from the four corners of the earth.” Isaiah 11:12 (KJV)

I remember as a child, seeing the photos and news reels of the concentration camps. I remember wondering how the Germans could do this to my people. What did we do to deserve this? How could they starve my people, and how could they line them up and shoot them like dogs? How could they gas them and then throw them in incinerators? Six million……..

One day in school, our teacher showed a Holocaust film. There were some boys in the back of the class who were laughing at the piles of emaciated bodies. I ran out of the class and began to cry. My teacher came out and apologized for the behavior of the boys.

Netanyahu used the platform at Yad Vashem to compare that agreement with the concessions the Western world made to the Nazis in the 1930s, before the outbreak of World War II.

In synagogue, my teacher would tell us that we were the most hated people on the earth. She said that we were scapegoats for any bad thing that happened. She said that Christians called us Christ killers. I didn’t like being Jewish as a young girl. I’m sorry if that sounds horrible, but I’m just being honest. Who in the world would want to be a Jew and be hated by the whole world?

The parents of my best friend in high school were survivors of Auschwitz. They had the tattooed numbers on their arms. They had survived because her mom was a translator, and her dad was a tailor. The Nazis used them for their services. When they came to America, they changed their last name so it wouldn’t sound Jewish. They changed it to Ross.

“Has the world really learned from the incomprehensible, universal and Jewish tragedy of the last century? I wish I could tell you that the answer is yes,” Netanyahu said. source

My friend and I lost touch after high school, but we found each other on Facebook. We were so excited until she realized that I believed in Jesus. She told me that she was going to block me. She said that many in her family had died in the camps, and when they saw anything about Christianity, it made them very anxious. I told her that I was so sad to lose her after finding her, but she blocked me. I did send her an email, before she blocked that too, and shared that Yeshua was truly the Messiah of the Jews. I told her what she must do to be saved. She never wrote back and blocked my email.

I was saved in 1983, and only then did I begin to realize why the Jews were so hated. It was spiritual — Satan hated my people and wanted to kill them! All those years I thought that people just hated us for no reason. Mom would say they were jealous, but that never made sense to me. It was Satan all along, putting that hatred in the hearts of men and women for the Jews.

Jesus came from the Jewish people. The law and the prophets came from us. Grace came through Jesus through us. No wonder Satan hates us so much. I heard Pastor JD Farag say that ISIS and all of the radical jihadist Muslims were just Nazism re-packaged. That made so much sense to me!

I started wondering why people in this world cannot understand that something else is at work here. Think about this — a piece of real estate the size of New Jersey, with enemies surrounding them, and they are always in the headlines on the news! Don’t people begin to wonder? But I suppose that if they are lost and blind, that they wouldn’t even give it a thought. They would just hate the Jews like most of the world.

But God is always working; always fulfilling His prophetic Word for His people. Israel was established n 1948 because of the Holocaust! It’s a terrible price to pay, but His Word was fulfilled. 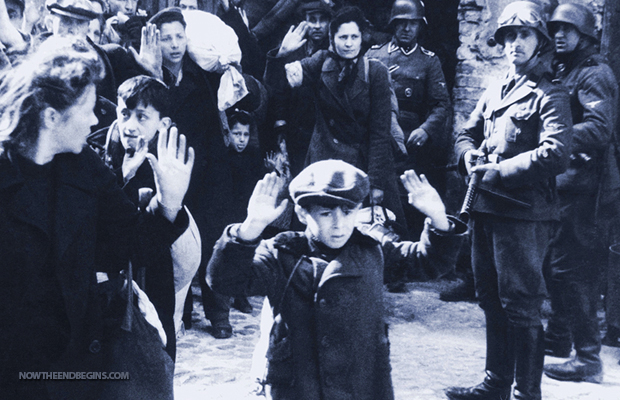 Dan Porat’s obsession with “the boy,” he recounts, began on a visit to Yad Vashem in 2004. He happened to be standing near a foreign delegation touring the museum when their guide pointed to a print of a famous photo and remarked: “Did you know that this picture tells a good story of the Holocaust? This boy survived. After the Holocaust, he studied medicine, became a doctor and settled in New York. A year ago, he immigrated to Israel.”

Before then, my people were scattered all over the world. My people were from Ukraine and Russia, and came to America in 1903 through Ellis Island, NY. It was a blessing that they did come, because years later there was a mass slaughter of my people in Kiev, Ukraine. That is where most of my people lived.

When Bibi Netanyahu says “Never Again” he means that we will never again let the world slaughter us without a fight. And to that I say amein and amein!!

Am Yisrael Chai!! The people of Israel LIVE!!!