Hamas is warning that if President Obama visits the Temple Mount it would be a “declaration of war” against the Islamic world. Israel National News reports the terror group... 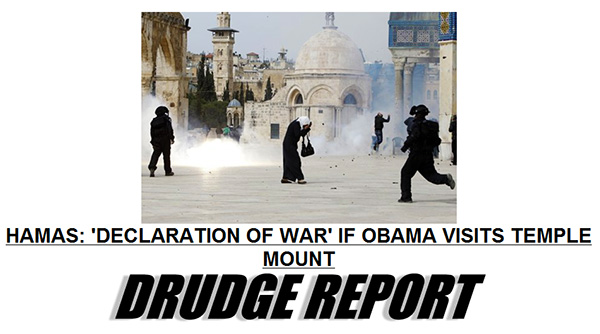 WASHINGTON (CBSDC/AP) — Hamas is warning that if President Obama visits the Temple Mount it would be a “declaration of war” against the Islamic world. Israel National News reports the terror group made the threat during a protest march at the religious site following riots on Friday.

Obama told them he intends to reiterate the U.S. commitment to Israel’s security and to discuss regional concerns – including Syria – with Jordan’s leadership, the White House said.

Mushir al-Masri, a Hamas spokesman, called for a third intifada if Obama visits the contested religious site in Jerusalem’s Old City between Israelis and Muslims.

Public Security Minister Yitzchak Aharonovich believes the warning will lead to violence flaring up in the region ahead of the president’s visit.

“The Palestinians have not said the final word yet and we expect that there will be attempts to take advantage of the upcomingevents, like the visit by Barack Obama, in order to continue the violence,” Aharonovich told Israel National News.

White House officials have said Obama doesn’t plan on visiting the Temple Mount during his trip.

Both Israelis and Muslims have claimed sovereignty over the Temple Mount since Israel liberated the site during the 1967 Six-Day War. Israel left the Waqf in charge of the compound.

Obama met with about 10 leaders of Arab American groups on Monday, encouraging the president to deliver a message of hope to the Palestinian people.

“[T]here are opportunities for him to say things that get into the public discourse about America’s commitment to them, about America’s understanding of their situation,” Jim Zogby, president of the Arab American Institute, told The Associated Press.

Following the meeting, the White House said Obama told the group that his trip was not meant to resolve a specific policy issue, but that it was an opportunity for Obama to demonstrate U.S. commitment to the Palestinian people. source – CBS Washington