The world's greatest snow-capped peaks, which run in a chain from the Himalayas to Tian Shan on the border of China and Kyrgyzstan, have lost no ice over the... 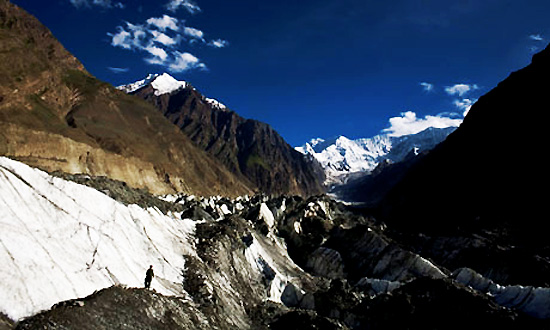 Al Gore and his Inconsistent Truth

The world’s greatest snow-capped peaks, which run in a chain from the Himalayas to Tian Shan on the border of China and Kyrgyzstan, have lost no ice over the last decade, new research shows.

Hopar glacier in Pakistan. Melting ice outside the two largest caps - Greenland and Antarctica - is much less then previously estimated, the study has found. Photograph: Paula Bronstein/Getty Images

The discovery has stunned scientists, who had believed that around 50bn tonnes of meltwater were being shed each year and not being replaced by new snowfall.

The study is the first to survey all the world’s icecaps and glaciers and was made possible by the use of satellite data. Overall, the contribution of melting ice outside the two largest caps – Greenland and Antarctica – is much less then previously estimated, with the lack of ice loss in the Himalayas and the other high peaks of Asia responsible for most of the discrepancy.

Bristol University glaciologist Prof Jonathan Bamber, who was not part of the research team, said: “The very unexpected result was the negligible mass loss from high mountain Asia, which is not significantly different from zero.”

The melting of Himalayan glaciers caused controversy in 2009 when a report from the UN’s Intergovernmental Panel on Climate Change mistakenly stated that they would disappear by 2035, instead of 2350. However, the scientist who led the new work is clear that while greater uncertainty has been discovered in Asia’s highest mountains, the melting of ice caps and glaciers around the world remains a serious concern. source – Guardian UK