Have you been fooled by this rocker, who talks about his love for Jesus, but in reality shows his love for Satan during his performances?... 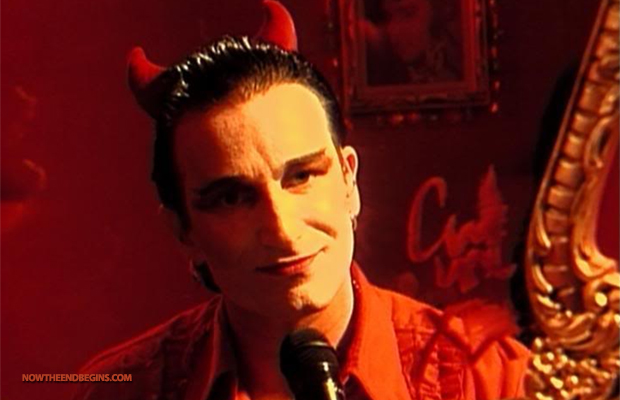 Bono of US is not everything he seems to be, or maybe he really is.
by Geri Ungurean February 9, 2015
NOW THE END BEGINS SHARE:

This article will shock and sadden some of you, who have believed that Bono of U2 fame is a Christian.

This article will show you that not only is Bono not a Christian, but he is from the dark side.

When I was drawn by the Lord in 1983, it was a powerful and supernatural event. I had searched for the truth about God for most of my life. On that unforgettable night, He opened my eyes and my heart, and I remember saying to the person sharing Salvation with me “This is it!! It’s so clear to me now!”

I am not saying that we all have to have a dramatic, two feet off the floor experience. But I do believe that it should be a memorable time when a person finally realized that they are a wretched sinner – unable to save themselves, and that God is HOLY and HE does the saving.

Another thing I remember is that I could not get enough of His Word. I would forget to eat food because I was immersed in His Word, and could hardly break away from it. I was told to start with the Gospel of John and I did. Then I went through all four Gospels. His Holy Word became the most important thing in my life.

Bono of US is not everything he seems to be, or maybe he really is. So how did he come to be so connected with the Emergent Church?

I also had an immediate aversion to things that I had liked. I knew that He did not want me watching Soap Operas any longer. No one told me that except the Holy Spirit. I could not watch stand up comedians on HBO who were vulgar. It made me feel dirty, and I had never before given it a thought.

I knew that when I went to church, I should be hearing about sin and repentance. It was ALL about Jesus and Him crucified, and the Love that sent Him to that cross. I yearned to hear a preacher open up the Word to me in a deeper way. The couple who had led me to the Lord were charismatics, so I went to my first church with them.

I was brand new in Christ, but I still knew that the sermons I was hearing were leaving me empty. One Sunday night I saw Charles Stanley preaching on TV, and I considered him a gift from Jesus to me at that time of my walk with Him. When he preached, he backed everything up with Scripture. He spoke of sin and repenting and growing in Christ. I considered him to be my pastor in those early years.

I wonder about the walk of those with itchy ears; what went wrong in their walk, that they would be this deceived?

“For the time will come when they will not endure sound doctrine; but after their own lusts shall they heap to themselves teachers, having itching ears; And they shall turn away their ears from the truth, and shall be turned unto fables..” 2 Timothy 4:3-4 (KJV)

As I look around today, I see this passage of Scripture so clearly coming to pass. Perhaps there have always been many with itching ears, but I think that it is much worse in these last days. Were these people truly saved? How could they be so deceived? Did they attempt to come to God via the well traveled and very wide gate that God warns us to avoid? How can someone who has the Holy Spirit living within them, want their ears to be tickled with heresies? It makes no sense.

Rob Bell and Brian McLaren are two of the most well known leaders of the Emerging Church. Both men believe that there is no literal hell, and they teach this heresy to their people. Rob Bell, who wrote “Love Wins” preaches only about the love and mercy of our God. He is NOT preaching from the whole Word, because if he was, he would also preach on sin, the holiness of God, and repentance.

To truly lead a person to Christ, that person must agree with God that he/she is a sinner, in dire need of a Savior. They must understand that NOTHING they do will get them into heaven. Salvation is the work of God. He sent His one and only Son to die on that horrid Cross, to pay the penalty for sin for all people. BUT…..a person must receive His gift to be saved.

Have you been fooled by this rocker, who talks about his love for Jesus, but in reality shows his love for Satan during his performances? He has an alter ego named “MacPhisto.” Did you know that MacPhisto is in The Screw Tape Letters, by C.S. Lewis. The book’s characters are demons, and MacPhisto is a demon who works hard at communicating with baby Christians to get them away from God!

“But U2 is much more than a popular rock band. U2 has a great influence in the emerging church and the contemporary worship movement. U2’s lead singer Bono is praised almost universally among contemporary and emerging Christians. Phil Johnson observes that “Bono seems to be the chief theologian of the Emerging Church Movement” (Absolutely Not! Exposing the Post-modern Errors of the Emerging Church, p. 9).

“Bono played a far more significant role on the formative years on those who became emergent than anyone else, from a human standpoint. Bono, in the 1980s, was, if not worshipped, then absolutely adored by millions of Christian youth who were hanging on his every word. They saw his cool kind of Christianity. He helped lead people into what eventually became the emerging church. Bono has led people into a version of Christianity that is so slippery, so undefinable, so liberal, yet he is considered the main icon of the emerging church” (Joseph Schimmel, The Submerging Church, DVD, 2012).” [1] – source

What has been said about Bono from Emerging Church leaders:

The members of U2 do not support any specific church or denomination. Very rarely do they attend church at all. But one church that Bono will attend from time to time is Glide Memorial United Methodist Church located in San Francisco. Bono attended a special service back in 1992, to honor Bill Clinton’s presidential election.

“Speaking at a meeting connected with the 1972 United Methodist Church Quadrennial Conference, Cecil Williams, pastor of the Glide Memorial Methodist Church, said, “I don’t want to go to no heaven … I don’t believe in that stuff. I think it’s a lot of – – – – [vulgarity].” A Jewish rabbi is on William’s staff. Williams was the Grand Marshall of the San Francisco Gay Pride parade and the chairman of his board was a homosexual. He has been “marrying” homosexuals since 1965 and says, “I have not married a single couple at Glide who weren’t already living together” (Williams, speaking at the Centenary United Methodist Church, St. Louis, quoted in Blu-Print, April 25, 1972). Long ago William’s church replaced the choir with a rock band, and its “celebrations” have included immoral dancing and even complete nudity. After attending a service at Glide Memorial, a newspaper editor wrote, “The service, in my opinion, was an insult to every Christian attending and was the most disgusting display of vulgarity and sensuousness I have ever seen anywhere.” [2] – source

Bono believes that heaven and hell are here and now. He does not believe in a literal hell as is described in the Word of God.

Hell is Real, and it’s not this side of Eternity

“The punishment of the wicked in hell is as never ending as the bliss of the righteous in heaven. Jesus Himself indicates that punishment in hell is just as everlasting as life in heaven (Matthew 25:46). The wicked are forever subject to the fury and the wrath of God. Those in hell will acknowledge the perfect justice of God (Psalm 76:10). Those who are in hell will know that their punishment is just and that they alone are to blame (Deuteronomy 32:3-5). Yes, hell is real. Yes, hell is a place of torment and punishment that lasts forever and ever, with no end. Praise God that, through Jesus, we can escape this eternal fate (John 3:16, 18, 36).” [3] – source

Are those in the Emerging Churches saved but extremely shallow and immature? Or is it possible that they never were saved in the first place? I can’t make that call, but it distresses me greatly to watch people who name the name of Jesus as their Savior, following after false teachers who preach a different gospel.

I do know that the false teachers will be judged harshly.

“My brethren, be not many masters, knowing that we shall receive the greater condemnation.”

When I speak truth about false teachers to their followers, I am attacked and accused of judging. We will go in circles about this, but it always comes back to being told that I am a judgmental and mean spirited person. I always show them the scriptures which clearly condemn the heresies, but they will not look at God’s Word; or if they do look, they take it completely out of context. Sometimes I feel like ignoring these types, but then I remember that the Lord wants us to always speak truth.

I do hope that this article has provided enough evidence as to why the Emerging Church leaders consider Bono to be their Icon. The itching ear crowd has brought to themselves teachers who feed their carnal needs — and have rejected the Word of God.

Do you have itching ears? Do you remember a time that you finally saw yourself as a sinner in need of a Savior? Can you think back to the time that you asked Jesus Christ to come into your heart and be your Lord and Savior?

“Examine yourselves, whether ye be in the faith; prove your own selves. Know ye not your own selves, how that Jesus Christ is in you, except ye be reprobates?”

If you cannot remember such a time, and the words of this article are making you uncomfortable, it’s not too late! Today may be the day of your Salvation: