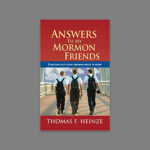 Answers To My Mormon Friends

This easy-reading book, written for either Christians or Mormons, proves that Mormonism is not of God, and includes a clear gospel message and salvation appeal.

Categories Books, Day 777 Of 15 Days To Flatten The Curve, The Cults

Mormonism stands or falls on the life of its founder, Joseph Smith

That’s why you (and Mormons who read this book) will be amazed as you learn about Smith’s personal life, starting with his early youth and progressing to his later years.

This well-researched book also exposes serious problems with the doctrines Smith created, as well as facts you need to know about his abilities as a translator.

This easy-reading book provides powerful information to convince Mormons that their religion cannot be of God. It was written to be read by either Christians or Mormons, and includes a clear presentation of the gospel and an invitation to trust Christ alone for salvation.