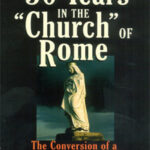 The autobiography of Charles Chiniquy, who, as one of its priests, discovered the hypocrisies of the Roman Catholic Church.

The autobiography of Charles Chiniquy, who, as one of its priests, discovered the hypocrisies of the Roman Catholic Church.

As a child, Chiniquy memorized scriptures at his mother’s knee and developed a deep love for God. Becoming a priest, he wanted desperately to place full trust in his “church”, but was hit by waves of doubt as his “church” claimed adherence to the Gospel, yet violated it at every turn. His jealous superiors falsely accused him, but Abraham Lincoln, a young lawyer from Illinois, defended him and saved his reputation. Chiniquy proves that it was the Jesuits who later killed Lincoln, and explains why.

Finally, after twenty-five years as a priest in the Roman Catholic Church, his bishop demanded that he give up his precious Bible, and pledge blind obedience to the “church. After a dark night of struggle, he emerged gloriously saved, and led almost the entire Catholic population of St. Anne, Illinois to trust in Christ alone. Here is the finest work ever written to show, from the inside, what Catholicism really is. You will feel Chiniquy’s broken heart for Catholics, even as he clearly refutes Catholicism’s errors. Now, abridged from the 1886 edition, it is even more readable than before!