The US reportedly breached the silent agreement to keep quiet on Israel's nuclear powers for the first time ever, detailing the nuclear program in great depth.... 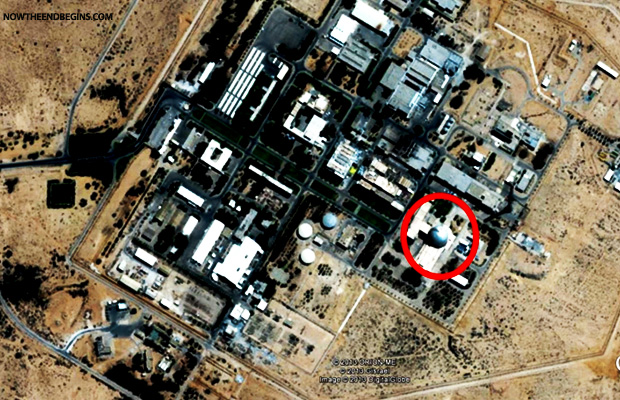 EDITOR’S NOTE: With this latest move, the Obama administration has declared itself to be, if not at war, then certainly at fatal odds with the nation of Israel in general, and with Benjamin Netanyahu in particular. Obama is all done pretending to be a friend to Israel, and the Spirit that controls him is only going to make sure things get worse quickly.

In a development that has largely been missed by mainstream media, the Pentagon early last month quietly declassified a Department of Defense top-secret document detailing Israel’s nuclear program, a highly covert topic that Israel has never formally announced to avoid a regional nuclear arms race, and which the US until now has respected by remaining silent.

But by publishing the declassified document from 1987, the US reportedly breached the silent agreement to keep quiet on Israel’s nuclear powers for the first time ever, detailing the nuclear program in great depth.

Obama is the first president in the past 50 years to not honor Israel’s request for privacy and security regarding their very necessary nuclear program for strategic defense against their hostile, aggressive Muslim neighbors.

The timing of the revelation is highly suspect, given that it came as tensions spiraled out of control between Prime Minister Binyamin Netanyahu and US President Barack Obama ahead of Netanyahu’s March 3 address in Congress, in which he warned against the dangers of Iran’s nuclear program and how the deal being formed on that program leaves the Islamic regime with nuclear breakout capabilities.

Another highly suspicious aspect of the document is that while the Pentagon saw fit to declassify sections on Israel’s sensitive nuclear program, it kept sections on Italy, France, West Germany and other NATO countries classified, with those sections blocked out in the document. The 386-page report entitled “Critical Technological Assessment in Israel and NATO Nations” gives a detailed description of how Israel advanced its military technology and developed its nuclear infrastructure and research in the 1970s and 1980s.

Israel is “developing the kind of codes which will enable them to make hydrogen bombs. That is, codes which detail fission and fusion processes on a microscopic and macroscopic level,” reveals the report, stating that in the 1980s Israelis were reaching the ability to create bombs considered a thousand times more powerful than atom bombs.

The revelation marks a first in which the US published in a document a description of how Israel attained hydrogen bombs. The report also notes research laboratories in Israel “are equivalent to our Los Alamos, Lawrence Livermore and Oak Ridge National Laboratories,” the key labs in developing America’s nuclear arsenal.

Israel’s nuclear infrastructure is “an almost exact parallel of the capability currently existing at our National Laboratories,” it adds. “As far as nuclear technology is concerned the Israelis are roughly where the U.S. was in the fission weapon field in about 1955 to 1960,” the report reveals, noting a time frame just after America tested its first hydrogen bomb.

Institute for Defense Analysis, a federally funded agency operating under the Pentagon, penned the report back in 1987.

Aside from nuclear capabilities, the report revealed Israel at the time had “a totally integrated effort in systems development throughout the nation,” with electronic combat all in one “integrated system, not separated systems for the Army, Navy and Air Force.” It even acknowledged that in some cases, Israeli military technology “is more advanced than in the U.S.”

Declassifying the report comes at a sensitive timing as noted above, and given that the process to have it published was started three years ago, that timing is seen as having been the choice of the American government. US journalist Grant Smith petitioned to have the report published based on the Freedom of Information Act. Initially the Pentagon took its time answering, leading Smith to sue, and a District Court judge to order the Pentagon to respond to the request.

Smith, who heads the Institute for Research: Middle East Policy, reportedly said he thinks this is the first time the US government has officially confirmed that Israel is a nuclear power, a status that Israel has long been widely known to have despite being undeclared.

I thought we had seen the worst of Barack Hussein Obama’s evilness. This is unprecedented in the history of the United States relationship with their closest ally in the Middle East – Israel.

This proves that Obama would like to see Israel wiped off the map.

I have news for Mr. Obama. That will NEVER happen – no matter how much you want Israel to be destroyed, you cannot fight against God…and win.