The word Islam means submission. In this article I will take passages straight from the Qur’an which clearly show that Islam has nothing to do with peace. It has everything to do with beheading, raping, pillaging, and dominating the entire world. To those who practice Islam and are jihadists (the Qur’an commands this) their god Allah promises great rewards awaiting those who give their lives while fighting infidels. Who are the infidels? This term means anyone who does not believe the words of their prophet, Muhammad.

Why do the so-called ‘moderate Muslims’ never, ever speak out against radical Islam?

For many, this article will be eye-opening to say the least. We have all heard of Christians in name only. Moderate Muslims are Muslims in name only, and they are hated by those who are true to the Qur’an and to their prophet, Muhammad.

Islam is a totalitarian ideology, cloaked in robes of religion to present itself as honorable to an unsuspecting world. We have heard imams (Muslim clerics) who describe Islam as: “The Religion of Peace.” Islam is in truth a demonically influenced regime of warlords, whose goal is world dominance. 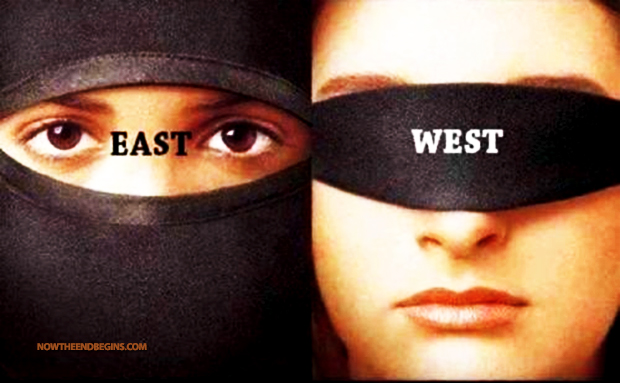 The Muslim Plan For World Dominance: Bringing The Whole World Under Sharia Law

The word Islam means submission. In this article I will take passages straight from the Qur’an which clearly show that Islam has nothing to do with peace. It has everything to do with beheading, raping, pillaging, and dominating the entire world. To those who practice Islam and are jihadists (the Qur’an commands this) their god Allah promises great rewards awaiting those who give their lives while fighting infidels.

Who are the infidels? This term means anyone who does not believe the words of their prophet, Muhammad. In fact, the Muslims in name only are hated by the Muslims who are obedient to the words in the Qur’an. Are you beginning to understand why the so-called moderate Muslims do not speak out against the terror? They are fearful for their own lives!

Here is an example of a command from their false god:

Quran (2:191-193) – “And kill them wherever you find them, and turn them out from where they have turned you out. And Al-Fitnah [disbelief] is worse than killing…but if they desist, then lo! Allah is forgiving and merciful. And fight them until there is no more Fitnah [disbelief and worshipping of others along with Allah] and worship is for Allah alone. But if they cease, let there be no transgression except against Az-Zalimun [the polytheists, and wrong-doers, etc.].”

Muslim jihadists must obey the words of their book. They fear for their own lives if they do not live as terrorists, because Allah has told them in their book that they should be killed for not obeying. In fact, doubting Allah in the mind of a Muslim is terrible thing. We wonder how they can be so brutal and merciless. It’s because they must show their god that they believe him, and that they will bring terror against all infidels and slay them if they do not convert to Islam.

Ben Shapiro: The Myth of the Tiny Radical Muslim Minority

In the debut of Reality Check, Ben Shapiro takes on Ben Affleck and the myth that only a tiny minority of Muslims worldwide are radical.

Quran (2:216) – “Fighting is prescribed for you, and ye dislike it. But it is possible that ye dislike a thing which is good for you, and that ye love a thing which is bad for you. But Allah knoweth, and ye know not.” (Here we see Allah proclaiming to his subjects that violence is virtuous. It even states that some may find it repulsive, but they must know that their god knows what is good for them.)

I believe that Allah is actually Satan. He fights primarily against Jews and Christians. He commands submission from his followers. Jesus is spoken of in the Qur’an, but it’s not the Jesus we know from the Word of God. Jesus – called Isa, is merely a prophet. It is emphasized that He is not the Son of God. On the roof of the mosque on the Temple Mount are inscribed these Arabic words: “God has no son.” That sounds demonic to me.

Quran (3:56) – “As to those who reject faith, I will punish them with terrible agony in this world and in the Hereafter, nor will they have anyone to help.”

Quran (4:74) – “Let those fight in the way of Allah who sell the life of this world for the other. Whoso fighteth in the way of Allah, be he slain or be he victorious, on him We shall bestow a vast reward.” (Unlike early Christian who were led meekly to their slaughter, Muslims are killed in battle for the cause of Allah. This is the basis for today’s suicide bombers.)

“We’re at war with Islam” Britain First rally in Belfast

Quran (8:12) – “I will cast terror into the hearts of those who disbelieve. Therefore strike off their heads and strike off every fingertip of them” These words are clear, and commentary here would be redundant. “

Quran (8:57) – “If thou comest on them in the war, deal with them so as to strike fear in those who are behind them, that haply they may remember.” I am reminded of the videos with beheadings that are posted for all to see. They love to put fear in the hearts of all infidels. “

Quran (9:5) – “So when the sacred months have passed away, then slay the idolaters wherever you find them, and take them captive and besiege them and lie in wait for them in every ambush, then if they repent and keep up prayer and pay the poor-rate, leave their way free to them.” (Clearly, these words show that the only way to escape death is to convert to Islam.)

Quran (9:29) – “Fight those who believe not in Allah nor the Last Day, nor hold that forbidden which hath been forbidden by Allah and His Messenger, nor acknowledge the religion of Truth, (even if they are) of the People of the Book, until they pay the Jizya with willing submission, and feel themselves subdued.” (People of the Book refers to Christians and Jews.)

Now you have seen a sampling from the Qur’an of the terror that is commanded by its words. Religion of Peace? Hardly – more like the Third Reich, meeting in mosques worldwide, and planning the demise of all who will not convert.

So why do we not hear what the Qur’an really says on the news? Why do politicians avoid what is stated in black and white on the pages of this terrifying book? I can only guess that some refuse to believe that a religion could actually be so violent as the jihadists are. They have their heads in the sand, believing that the ones beheading and raping must be a radical faction of the religion of peace. Perhaps others are just plain scared.

Here is a paragraph from President George W. Bush’s commencement address to the Air Force Academy, on 3 June 2004, illustrating the New World Order’s plan to disguise the real nature of Islam:

“History is once again witnessing a great clash. This is not a clash of civilizations. The civilization of Islam, with its humane traditions of learning and tolerance, has no place for this violent sect of killers and aspiring tyrants. This is not a clash of religions. The faith of Islam teaches moral responsibility that ennobles men and women, and forbids the shedding of innocent blood. Instead, this is a clash of political visions.” read source

This is another reason that I believe that Allah and Satan are one and the same. The deception is so blatant and so complete—only the enemy of God could pull this off. Some believe that Islam is in fact demonically influenced, but that Allah is not Satan. Be assured, that I am not saying that the Antichrist will be Islam. I believe that Satan manifests himself in many ways.

Now when you are watching the news and you hear someone speaking about the “radical jihadist” faction of Islam, you will know the truth.

I doubt that you will ever hear the phrase “Religion of Peace” ascribed to Islam, and not think back on the passages you’ve read here from the Qur’an.