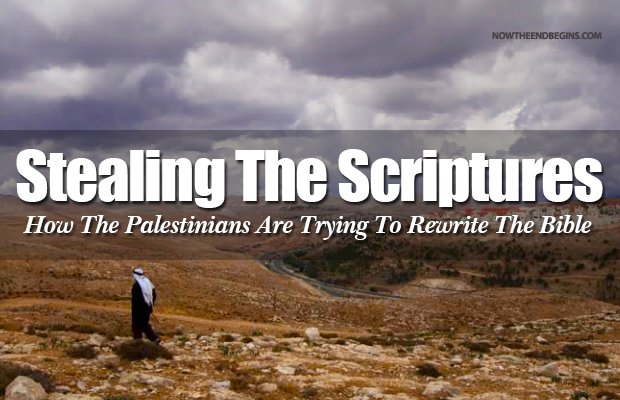 Have you heard that there is a new version of our Bible? But this version is unlike any prior version of God’s Word

“And many people shall go and say, Come ye, and let us go up to the mountain of the LORD, to the house of the God of Jacob; and he will teach us of his ways, and we will walk in his paths: for out of Zion shall go forth the law, and the word of the LORD from Jerusalem.” Isaiah 2:3 (KJV)

EDITOR’S NOTE: The Palestinian and Sabeel Liberation Theology groups have partnered with the Presbyterian Church (U.S.A.) as their main support for this satanic doctrine. And no wonder, the Presbyterian Church in recent years has become rabidly anti-Israel and ferociously pro-LGBT. The name of “Israel” occurs 2566 times in 2,294 verses in the KJV.

This new version blatantly changes God’s Word. Any mention of Israel – gone. Any mention of Jesus being a Jew – gone. The movement which has brought the world a NEW bible, is called Palestinian Liberation Theology. At its heart is hatred for the Jewish people and for Israel. Of course, keeping in line with this hatred, the leaders of this satanic movement have changed Jesus (Yeshua) from being Jewish to being a Palestinian Arab.

If there is one thing that the bible is, it’s a Jewish book from cover to cover. Jesus Christ is called the King of the Jews.

The Jewishness of Jesus is clearly documented in the Word of God – His Jewish lineage is recorded in the books of Matthew and Luke. But remember, the leaders and teachers of the PLT are reading from a new source – their own bible, hence they have made for themselves a new Jesus.

“And with all deceivableness of unrighteousness in them that perish; because they received not the love of the truth, that they might be saved. And for this cause God shall send them strong delusion, that they should believe a lie: That they all might be damned who believed not the truth, but had pleasure in unrighteousness.” 2 Thessalonians 2:10-12 (KJV)

WHO IS NAIM ATEEK?

An Arab Palestinian Anglican priest is at the forefront of this very evil and satanic movement. I wonder, does he really believe this nonsense, or is it in his desperation to bring the Palestinian people into the spotlight, while cursing Israel as the little Satan? Maybe a little of both, but he is definitely a casualty to the Strong Delusion spoken of in God’s Word.

“However, something new does crop up when someone like the Reverend Dr. Naim Stifan Ateek attempts to revise history. Dr. Ateek is an Arab Palestinian Anglican priest and the founder of Sabeel International Ecumenical Liberation Theology Center in Jerusalem. He has rewritten the whole story book in the same manner that Catholic, Anglican and Reformed theologies have claimed that the Christian Church is “The New Israel” also called “The Israel of God.” Rewriting history and inventing theology is a popular vocation. Revisionist historians take liberties with facts until they cease to have meaning. Prime examples are the Holocaust denial polemics or current trends to rewrite American history texts. 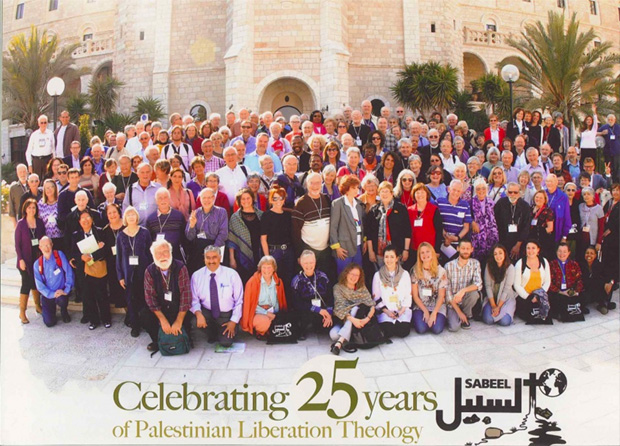 The group picture shown here was taken outside the Notre Dame Conference Center in Jerusalem. Twelve delegates from the Presbytery of Philadelphia joined over 200 other delegates from 15 countries to attend Sabeel’s 9th International Conference entitled “The Bible and the Palestine-Israel Conflict”. (Sabeel is an ecumenical center in Jerusalem for Palestinian Liberation Theology that seeks to make the Gospel contextually relevant.) – quoted from their website

Ateek has an axe to grind; he needs to advance his Palestinian agenda by displacing Israel. In an effort to push his version of Christian dogma, he rewrites the Bible and fabricates a formidable sounding contemporary social justice ideology. His personal fish story is born fully formed from the caverns of his own vivid imagination. If it weren’t so dangerous, it would be ludicrous.” [1] source

Another name for this movement is Sabeel Ecumenical Liberation Theology.

“Sabeel (Arabic ‘the way’ and also ‘a channel’ or ‘spring’) Ecumenical Liberation Theology Center is a Christian liberation theology organization based in Jerusalem. It was founded by Palestinian Anglican priest, Rev. Naim Ateek, the former Canon of St. George’s Cathedral in Jerusalem. An official partner of the Presbyterian Church USA, Sabeel has Friends of Sabeel chapters in the United States, Canada, the United Kingdom, Sweden, Denmark, Norway, Ireland, France, Germany, the Netherlands and Australia.” source

Should it really surprise us that the Presbyterian church is a partner in this? I’m not surprised at all. The other mainline churches who have jumped on this heretical bandwagon are: Episcopalian, Methodist, Lutheran and even some Evangelical churches in the U.S. have followed suit. I wonder when the Vatican will thrown in their hat?

Brethren, these things sound and indeed are so incredibly evil. But as followers of Yeshua, we should be rejoicing! YES, REJOICE!

God’s Prophetic Word is being fulfilled at breakneck speed! That means that we are close to His Glorious appearing, to take us away from this horrid place! Hallelujah!!

“And we know that all things work together for good to them that love God, to them who are the called according to his purpose.” Romans 8:28 (KJV)