There is an organization that we are hearing more and more about, called the United Religions Initiative.  Pope Francis has close ties to many members and especially to its founder, William E. Swing, a former bishop of the Episcopal Church in San Francisco.  When Pope Francis was the Archbishop of Buenos Aires, he invited Mr. Swing to celebrate the United Religions Initiative’s 10th anniversary in Latin America at his Cathedral.

I received an email this morning from a brother in Christ from Germany. He is a reader of our articles, and said that he thought I should know what is happening in Germany right now.

A Protestant pastor in Bremen, Germany preached that Christ is the only way to heaven, and now he is the talk of the town. The people are not praising him — Pastor Olaf Latzel is being accused of disparaging other religions, and the prosecuting attorney of Bremen is considering filing charges against him. Pastor Latzel’s sermon was delivered to his congregation on January 18, 2015.

“And the rest of the men which were not killed by these plagues yet repented not of the works of their hands, that they should not worship devils, and idols of gold, and silver, and brass, and stone, and of wood: which neither can see, nor hear, nor walk: Neither repented they of their murders, nor of their sorceries, nor of their fornication, nor of their thefts.” Revelation 9:20,21 (KJV)

From the Bremem Newspaper Die Welt:

“Bremen senior theologian whitefish Brahms described the sermon Latzels in part as “intellectual arson”. It is liable to make violence against foreigners, other faiths or asylum seekers feed. Latzel himself defended his sermon. The criticism was based on shortened and taken out of context quotes, he said on Radio Bremen. It is only against the mixing of Christianity with other religions.” [1] – source  *Note that you can choose to translate this website into English. 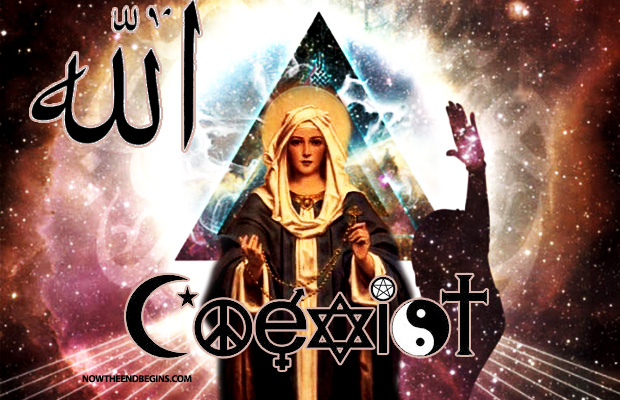 Latzel is against the preaching of Chrislam. Is it not clear that the only religion that answers others with “violence” is Islam? Much of political correctness stems from pure fear of violent retaliation from Islamic terrorists.

Pastor Latzel said in his sermon that while Muslims who are citizens of Germany do belong to Germany, Islam does not.  The prosecutor said that this talk is disrespectful to Muslim brothers and sisters. He also charged Latzel with “pure fundamentalism.” Pastor Latzel made it clear that he is against the mixing of Christianity with other religions.

The problem we are now facing stems from the belief that there is no absolute truth. This philosophy that everything is relative, depending upon the person and the circumstances, flies in the face of Christianity, where we understand that absolute Truth comes from and depends upon God and His Holy Word.

The Church worldwide is facing an angry unbelieving world, wanting to force us to accept gay marriage as normal. As followers of Jesus Christ, our measuring stick for truth is His Word. It won’t be long before many of us are incarcerated  and our churches closed, because those in authority claim that we are not tolerant of others.

The persecution of the pastor in Germany is actually more extreme, because he has caused a fire storm by proclaiming Christianity as set apart from other religions. The government in Germany does not approve of Christians saying there is only one way to heaven, and that is through the Lord Jesus Christ.

They are obviously pushing for a Universal church, where everyone is included, and no one is told that their beliefs are wrong. I can’t help but notice the irony here — that a Christian pastor’s words being scrutinized and him reprimanded, but we must tread oh so lightly with the Muslims, for fear that we may be blown up!

Pastor Olaf Latzel knows that Allah and the God of the Bible are not the same God. There is much confusion coming out of the RCC and from pastors like Rick Warren and others, claiming that Christians and Muslims worship the same God. One must only look at the Lord Jesus Christ in the Scriptures and compare Him to the one called “Isa” in the Qur’an, to clearly see that Allah and our God are completely different.

Jesus Christ is God incarnate. He is also the Son of God.  He was crucified on a Cross and died for the sins of the whole world — that whosoever believes in Him would have eternal life.  The Qur’an states that Isa never claimed to be God, and that he was not crucified. The Qur’an goes on to say that “God has no son.”  Could it be any clearer that Muslims and Christians do NOT worship the same God?  I firmly believe that Allah is Satan.  One of the names for Allah is “The great deceiver.” Satan is the one propagating these lies in order to establish his One World religion.

There is an organization that we are hearing more and more about, called the United Religions Initiative.  Pope Francis has close ties to many members and especially to its founder, William E. Swing, a former bishop of the Episcopal Church in San Francisco.  When Pope Francis was the Archbishop of Buenos Aires, he invited Mr. Swing to celebrate the United Religions Initiative’s 10th anniversary in Latin America at his Cathedral.

“The URI is a United Nations project. It was heralded in June 1995 by Bishop Swing at the occult, earth-worshipping interfaith service he was invited to conduct for the UN, honoring the 50th anniversary of the signing of the UN Charter. Attending the service in San Francisco’s Episcopal Grace Cathedral were political luminaries and representatives of all religions, including Britain’s Princess Margaret, Anglican Archbishop Desmond Tutu of South Africa, Polish President Lech Walesa, UN Secretary-General Boutros Boutros-Ghali, Archbishop Renato Martino (Vatican nuncio to the UN), and Archbishop John Quinn of San Francisco.

The URI is meant to be for religions what the UN is for nations. Its purpose is to be the world religious authority, “a UN for religion” in order to foster peace. Delegates to its charter-writing summit in 1997 considered they had given birth to a “movement as well as a spiritual institution”. “Tell the people that there is a United Religions,” said Swing. It will shine “the light of the world’s spiritual traditions [paganism and occultism included] into a world desperately in need of light.” It aims to solve issues of environment, population, poverty and disease whilst building religious unity.” [2] – source

“Pope Francis’s openness to other faiths is part of a trend at the Vatican. A post today on the Wild Hunt noted that on a recent trip to Brazil, Pope Francis met with representatives of Candomble.  The post asked:

If the Pope embraces reconciliation with Candomblé, with real, human, interface between leaders, why shouldn’t Catholics also embrace practitioners of Voodoo? Or indigenous African religions? Or modern Paganism, for that matter? Indeed, the Pope’s new attitude is needed more now than ever before. We live in a world where human beings, fueled by religious beliefs, are persecuting and killing one another in increasingly disturbing incidents. What better time for a Pope to emphatically embrace an interfaith mission? A mission that had been blunted during the Papacy of Benedict, but now, hopefully, will bear new fruit.” [3] – source

Brethren, the political correctness which we see permeating every area of life in America, is sweeping Europe as well. Don’t think for a moment that this event happening in Bremem, Germany will not happen in America, and soon in every country of the world.

I will gladly go to jail if asked to renounce my belief in this verse of Scripture.