One Person Alone Following God Is Like An Army

Once again she asked me with whom I was affiliated. I told her that one person following God is like an army. Again she had no response.... 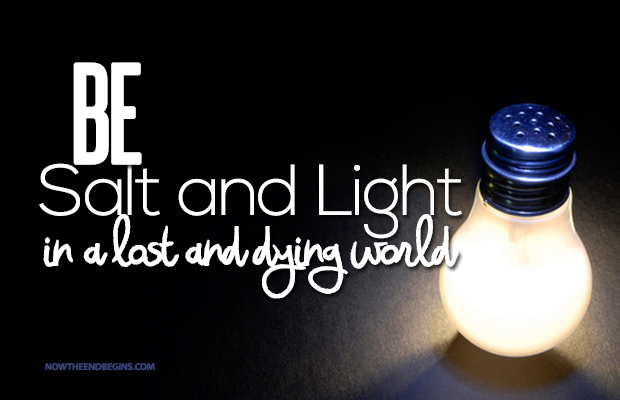 Being salt and light to a lost and dying world

“Ye are the salt of the earth: but if the salt have lost his savour, wherewith shall it be salted? it is thenceforth good for nothing, but to be cast out, and to be trodden under foot of men. Ye are the light of the world. A city that is set on an hill cannot be hid.” Matthew 5:13,14

Since I was born-again in 1983, I have been a Christian activist. It certainly wasn’t something I aspired to be. But as time went on, it became evident that God had planned to use me in this way.

I told her that one person following God is like an army.

I wrote a lot about the horrors of abortion. I wrote about God being taken out of schools. One day, my mentor showed me his home town newspaper and on the front page was a story about Wicca. It spoke of Wicca in a way that seemed to glorify it. I called the editor of that paper and told him that I was disappointed that a small town paper would print such a thing. I told him that I was a Christian, and asked if he would ever publish a similar story about being Christian.

The editor said that if I wished to write a rebuttal to the piece on Wicca, that he would publish it on the Op/Ed section of the paper – not as a letter to the editor, but as a stand-alone article along with my picture. I agreed and he sent out his photographer.

I prayed for the Lord to help me write this article. I wrote that Wicca promotes worship of the earth.I said that born-again Christians worship the Creator of the earth and that we have a relationship with Him.

I wrote that worshiping the earth was like going into an art museum and seeing a magnificent painting, only to praise the piece itself, never seeking out the artist who painted it. Not only do Christians know who created the earth, but we love and worship Him, and know Him because of His Word in the Bible which He left for us. Needless to say, that article caused a firestorm of rebuttals, condemning Christianity and exalting Wicca.

One night at choir practice, my writing mentor dropped a magazine in my lap. He said, “You’ll know what to do.” When I got home, I read through the magazine and was horrified. The name of the magazine was Sassy. I read that this magazine was marketed to girls ages 12-15. Being a Christian woman, I cannot write here what I read in Sassy. I will say that it was pornographic and so very disgusting.

I received James Dobson’s Focus on the Family magazine, and was surprised to read that there were Christian women in various parts of the country, actively exposing Sassy as pornography for our young girls. I realized that in my part of the country, no one was doing this—not yet!

I prayed that God would show me what to do. First I found out where Sassy was being sold. Then I typed up a cover letter to each of these stores, and made copies of the most offensive pornographic material to send with the letter. The letter read:

Dear Marketing Manager,
I want you to be aware of a magazine that is being sold in your stores. I am quite certain that you are unaware of the pornographic content in this magazine, which is marketed to girls ages 12-15. If you had known, surely you would have rejected Sassy magazine.

I did a mass mailing out to the stores. After about a week, I received a phone call from Sassy magazine in New York. I was very surprised that they had my name. The woman told me that they had lost distribution in most of the larger retailers in our area. She said that Sassy was told that I had done this. She asked me if I was affiliated with Jerry Falwell. I told her I was not, but that I was affiliated with God.

She went on to say that they were getting push back in many parts of the country. I asked her why that should surprise her. She had no answer. Sassy originated in Australia, and did not receive such criticism in that country. I told her that she was in America, not Australia, and that her magazine was smut. Once again she asked me with whom I was affiliated. I told her that one person following God is like an army. Again she had no response.

About a week later, she called once again. This time she told me that she and the owners of Sassy realized that the format of their magazine had to change. She said that they had compiled the first new edition and wondered if I would look through it and give them my feedback. I told her that would be fine. In a few days it came in the mail.

I read all the way through it. It was vastly different – more like Seventeen magazine. I didn’t love that magazine either, but it was in no way pornographic.I received another call from the lady from Sassy, asking if I received the new and improved Sassy, and what did I think of it. I told her that it was acceptable to me; still not wholesome, but certainly not smut.

Then she asked me a question that I did not expect. She had the audacity to ask if I could write to the stores from where I had Sassy removed, and ask them to please reinstate it.

I’m sure that she did not expect my response to her as well. I told her that she and her staff had gotten themselves into this mess, and they would have to figure out how to market Sassy again without my help.

Sassy folded in 1994. Now if that isn’t a testimony to how one person can change things, I don’t know what is.

There is not room to write about all the other things that God helped me to get changed; perhaps another article.

I wrote this piece to encourage other Christians to SPEAK UP!

We are children of Almighty God. We are aware from God’s Word that in these last days evil will get much worse. But as long as we are still on this earth, shouldn’t we be defending that which is good and right and godly?

One child of God can bring change!