Will The Coming New Madrid Earthquake Split The United States In Two?

The New Madrid fault zone is six times larger than the San Andreas fault zone in California and it covers portions of Illinois, Indiana, Missouri, Arkansas, Kentucky, Tennessee and... 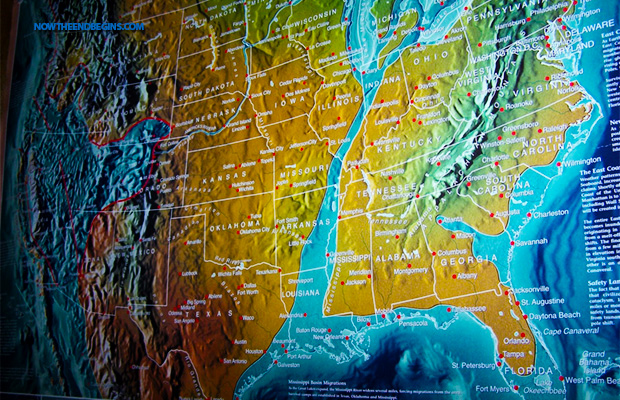 Emergency Management Agency director Jeff Shawan said the report and others like it paint a grim picture of life in Southeast Missouri if the New Madrid monster quake occurs.
by Geri Ungurean March 1, 2015
NOW THE END BEGINS SHARE:

The U.S. government and large corporations are so concerned about the potential for a major New Madrid earthquake that they have held major exercises that simulate one.

Yesterday, a friend wrote to me that the New Madrid Fault line had a small earthquake. It was 3.1 on the Richter Scale, and 7 miles deep. Now, I know that sounds insignificant. But I thought that the readers should know the history behind New Madrid fault zone.

I read this piece this morning from a Missouri website which tracks movement on the New Madrid:
“An updated USGS report says the New Madrid Seismic Zone has a larger range of potential earthquake magnitudes than previously imagined.

Emergency Management Agency director Jeff Shawan said the report and others like it paint a grim picture of life in Southeast Missouri if the New Madrid monster quake occurs.

Once upon a time, North America almost divided along a very deep subsurface rift. Today, that rift system and the faults associated with it are known as the New Madrid fault zone. This fault zone is six times larger than the San Andreas fault zone in California and it covers portions of Illinois, Indiana, Missouri, Arkansas, Kentucky, Tennessee and Mississippi. Back in 1811 and 1812, four of the largest earthquakes in U.S. history struck that area of the country. The movement of the ground was so powerful that it changed the course of the Mississippi River and it rang church bells in Boston, Massachusetts.

Back in 1811 and 1812, there were four earthquakes along the New Madrid fault zone there were so immensely powerful that they are still talked about today.
Those earthquakes opened deep fissures in the ground, caused the Mississippi River to run backwards, and were reportedly felt more than 1,000 miles away. It is said that the stench of fire and brimstone hung in the air for months afterwards. The most powerful of this series of quakes was on December 16th, 1811. The following is one description of what happened on that day…

This powerful earthquake was felt widely over the entire eastern United States. People were awakened by the shaking in New York City, Washington, D.C., and Charleston, S.C. Perceptible ground shaking was in the range of one to three minutes depending upon the observer’s location. The ground motions were described as “most alarming and frightening” in places like Nashville, Tenn., and Louisville, Ky. Reports also describe houses and other structures being severely shaken, with many chimneys knocked down. In the epicentral area the ground surface was described as being in great convulsion, with sand and water ejected tens of feet into the air — a process called liquefaction.

So could such an earthquake (or worse) strike today? Well, last year the U.S. Geological Survey released a report that warned that the New Madrid fault zone has the “potential for larger and more powerful quakes than previously thought”, and the USGS also admits that the number of significant earthquakes in the middle part of the country has more than quintupled in recent years. We also know that the U.S. government and large corporations are so concerned about the potential for a major New Madrid earthquake that they have held major exercises that simulate one. Scientists tell us that it is just a matter of time until another superquake hits the region, and personally I am one of the millions of Americans that believe that we will eventually see a New Madrid earthquake that will divide the United States in half. That is one of the reasons why I included a New Madrid earthquake in my novel.

But others are skeptical. They point out that we have not seen a truly devastating earthquake in that region for more than 200 years. So why be concerned about one now?