The Phony Muslim Jesus VS. The Actual Jesus As Found Inside The Pages Of The Holy Bible

I am writing this piece so that you can be equipped to speak truth to those who are deceived. If a head pastor of a church of over 1000 people believes this lie, then surely there are many others. I am so grieved over this — mostly for the people in the congregations of these wolves.

In recent weeks, I have been in conversations with a pastor from a large Baptist church in Richmond, VA. He believes that Allah and our God are one and the same. He told me that Muslims see God through the lens of Muhammad, and that Christians see Him through the lens of Jesus Christ. This is heresy !!

I am writing this piece so that you can be equipped to speak truth to those who are deceived. If a head pastor of a church of over 1000 people believes this lie, then surely there are many others. I am so grieved over this — mostly for the people in the congregations of these wolves. 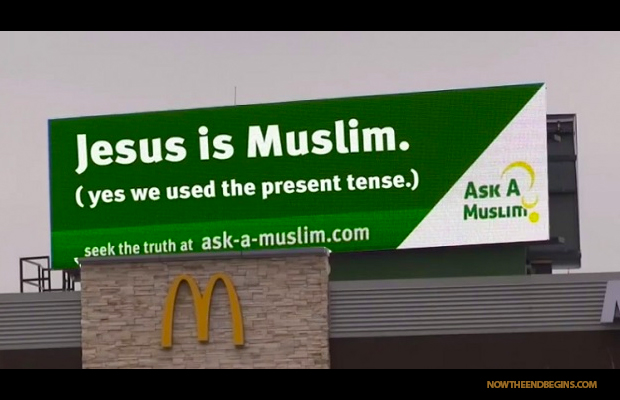 The teaching that the Jesus of the Holy Bible has anything in common at all with Islam is called Chrislam. It’s a demonic heresy, click to read more.

Because this pastor is not adhering to the Word of God, he is vulnerable to being deceived in most every area of Biblical teaching. He is close friends with Brian McLaren — the father of the Emerging Church movement. The Richmond pastor has meditation and centering and other New Age practices on his website. He also states that God may or may not be a female!

“ For the mystery of iniquity doth already work: only he who now letteth will let, until he be taken out of the way. And then shall that Wicked be revealed, whom the Lord shall consume with the spirit of his mouth, and shall destroy with the brightness of his coming: Even him, whose coming is after the working of Satan with all power and signs and lying wonders, And with all deceivableness of unrighteousness in them that perish; because they received not the love of the truth, that they might be saved.

And for this cause God shall send them strong delusion, that they should believe a lie: That they all might be damned who believed not the truth, but had pleasure in unrighteousness. But we are bound to give thanks alway to God for you, brethren beloved of the Lord, because God hath from the beginning chosen you to salvation through sanctification of the Spirit and belief of the truth: Whereunto he called you by our gospel, to the obtaining of the glory of our Lord Jesus Christ.

Therefore, brethren, stand fast, and hold the traditions which ye have been taught, whether by word, or our epistle. Now our Lord Jesus Christ himself, and God, even our Father, which hath loved us, and hath given us everlasting consolation and good hope through grace, Comfort your hearts, and stablish you in every good word and work.”  – 2 Thessalonians 2:7-17

I will be taking passages from the Qur’an about Jesus – whom they call “Isa” and then I will post Scripture which will expose the passages from the Qur’an as counterfeit. Should it surprise us that Satan would establish this religion? Satan always takes a little bit of truth, and then perverts it with his lies. He has been doing this since being cast from heaven by God. Let’s begin at the beginning:

From the Qur’an about Abraham

From the Bible about Abraham

“And God said unto Abraham, As for Sarai thy wife, thou shalt not call her name Sarai, but Sarah shall her name be. And I will bless her, and give thee a son also of her: yea, I will bless her, and she shall be a mother of nations; kings of people shall be of her. Then Abraham fell upon his face, and laughed, and said in his heart, Shall a child be born unto him that is an hundred years old? and shall Sarah, that is ninety years old, bear? And Abraham said unto God, O that Ishmael might live before thee! And God said, Sarah thy wife shall bear thee a son indeed; and thou shalt call his name Isaac: and I will establish my covenant with him for an everlasting covenant, and with his seed after him.. (Genesis 17:15-19) (emphasis mine)

Announcement to Mary from Qur’an:

Announcement to Mary in the Bible:

“And in the sixth month the angel Gabriel was sent from God unto a city of Galilee, named Nazareth, To a virgin espoused to a man whose name was Joseph, of the house of David; and the virgin’s name was Mary. And the angel came in unto her, and said, Hail, thou that art highly favoured, the Lord is with thee: blessed art thou among women.” (Luke 1:26-28)

He shall be great, and shall be called the Son of the Highest: and the Lord God shall give unto him the throne of his father David: And he shall reign over the house of Jacob for ever; and of his kingdom there shall be no end. (Luke 1:32-33) (Emphasis mine)

Jesus is a messenger (Prophet) in Qur’an:

Christ the son of Mary was no more than a messenger; many were the messengers that passed away before him. His mother was a woman of truth. They had both to eat their (daily) food. See how Allah doth make His signs clear to them; yet see in what ways they are deluded away from the truth!” (5:575, Yusif Ali)

Jesus is God in the Bible:

“And the Word was made flesh, and dwelt among us, (and we beheld his glory, the glory as of the only begotten of the Father,) full of grace and truth.” (John 1:14)

The Crucifixion denied in the Qur’an:

The Crucifixion told in the Bible:

“And he bearing his cross went forth into a place called the place of a skull, which is called in the Hebrew Golgotha: Where they crucified him, and two other with him, on either side one, and Jesus in the midst. And Pilate wrote a title, and put it on the cross. And the writing was Jesus Of Nazareth The King Of The Jews.This title then read many of the Jews: for the place where Jesus was crucified was nigh to the city: and it was written in Hebrew, and Greek, and Latin.” (John 19:17-20)

“After this, Jesus knowing that all things were now accomplished, that the scripture might be fulfilled, saith, I thirst. Now there was set a vessel full of vinegar: and they filled a spunge with vinegar, and put it upon hyssop, and put it to his mouth. When Jesus therefore had received the vinegar, he said, It is finished: and he bowed his head, and gave up the ghost.” (John 19:28-30)

You are cursed if you say Jesus is God’s Son in Qur’an:

Jesus – Son of God in the Bible:

“Verily, verily, I say unto you, The hour is coming, and now is, when the dead shall hear the voice of the Son of God: and they that hear shall live.” (John 5:25)

“Say ye of him, whom the Father hath sanctified, and sent into the world, Thou blasphemest; because I said, I am the Son of God?” (John 10:36)

“When Jesus heard that, he said, This sickness is not unto death, but for the glory of God, that the Son of God might be glorified thereby.” (John 11:4)

“ But he held his peace, and answered nothing. Again the high priest asked him, and said unto him, Art thou the Christ, the Son of the Blessed? And Jesus said, I am: and ye shall see the Son of man sitting on the right hand of power, and coming in the clouds of heaven.” (Mark 14:61-62)

Brethren, please keep this article for a reference. Satan is roaming about in this world, deceiving and confusing people. The Word of God reigns supreme in the lives of Christians. Always use it to know truth!

“ All scripture is given by inspiration of God, and is profitable for doctrine, for reproof, for correction, for instruction in righteousness: That the man of God may be perfect, thoroughly furnished unto all good works.” (2 Timothy 3:16-17)

May you always be equipped for every good work!