The U.S. Council of Muslim Organizations (USCMO) has begun building the framework for a political party in Chicago.... 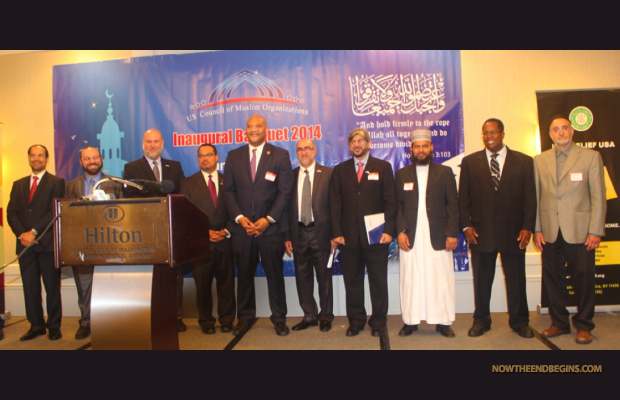 Obama’s good buddies, the Muslim Brotherhood, are starting a new political party out of Chicago with the help of  Muslim Congressman Andre Carson pictured below

“But while men slept, his enemy came and sowed tares among the wheat, and went his way.” Matthew 13:25 (KJV)

Everywhere you look, Barack Obama is opening the doors to the establishment of Islamic interests here in the United States. What would have been high treason in the aftermath of 9/11 – an Islamic political party in America – is now considered so commonplace that it barely raises an eyebrow. America is being Islamicized so fast, and so successfully, that it truly is unbelievable to most of us. Yet, that is exactly what’s happening right now. The second Muslim ever elected to Congress, Andre Carson, is working diligently alongside Obama to make sure that this new Islamic political party formed in the spiritual cesspool of America, Chicago, gets off the ground.

“According to the Center for Security Policy, the U.S. Council of Muslim Organizations (USCMO) has begun building the framework for a political party. USCMO’s party will also be the first political party in the U.S. to be openly connected to the Muslim Brotherhood. From what is reported by sources, this party arose right after Sabri Samirah, a Jordanian Brotherhood member, was allowed into the U.S. by President Barack Obama back in 2014 following an 11-year ban. He immediately galvanized Muslims to form the party, which is now recognized as the UMMA, an offset of the United Muslim Americans Association (UMAA).”

To promote promote the UMMA, the political party has taken to social media — especially Facebook and Twitter — to spread the word. One of their Facebook pages describes UMMA as a registered, non-profit, nonpartisan, grassroots organization dedicated to promoting the public and political empowerment of the American Muslim community as well as serve its interests. They also endorse candidates in which the percentage split is 85 percent Democrat and 15 percent Republican.” [1] – source

America, your death knell is being sounded, and you don’t even know it. Ask not for whom the bell tolls, it tolls for thee….