In 2011, Barack Obama appointed Mohamed Elibiary, a well known member of the Muslim Brotherhood, to a key position in our Department of Homeland Security.... 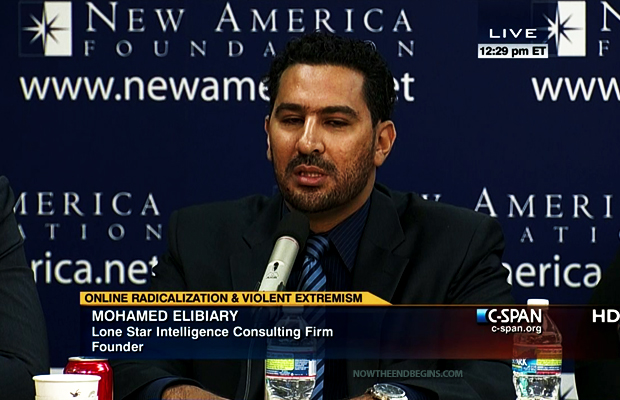 He is now back in his home state of TX and he’s helping with “securing” our border. Maybe that’s why 10 ISIS members were seen crossing the border. You really can’t make this stuff up.
by Geri Ungurean February 15, 2015
NOW THE END BEGINS SHARE:

In November 2013, Elibiary took to Twitter to announce that the U.S. was a shariah-compliant Islamic country

EDITOR’S NOTE: Mohamed Elibiary is just one of the many hardcore, radical, Muslim Brotherhood connected Islamists that president Barack Obama has filled the White House with. Elibiary was positioned, of all places, in sensitive areas in Homeland Security. When news of his deep connection with the Muslim Brotherhood leaked out, Obama was forced to remove him. But those connections where well known prior to his appointment, and in fact was the reason for his appointment. Obama’s greatest accomplishment, when all is said and done, may well be that he successfully implemented the Islamization of America.

In 2011, Barack Obama appointed Elibiary, a well known member of the Muslim Brotherhood, to a key position in our Department of Homeland Security. Oh……you didn’t know that? Sorry to be the one to break that news to you. And he’s not the only one. Obama has appointed numerous members of the MB to very sensitive positions in our government.

Back in September of 2014, Mohamed Elibiary was abruptly relieved of his duties at the Department of Homeland Security. There was speculation that he had leaked information to the Brotherhood, but nothing was confirmed. Where he is now and what he is doing should shock and alarm all of us.

He is now back in his home state of TX and he’s helping with “securing” our border. Maybe that’s why 10 ISIS members were seen crossing the border. You really can’t make this stuff up.

I actually had brief conversations with Mr. Elibiary on Twitter. I know — not smart. I guess I had a brief lapse in judgment. When our president had the secret meeting in the White House with Muslim Brotherhood buddies, and the press was banned, I wrote to Mohamed and asked how the meeting went, since none of the American people knew.

He tweeted back that it went well, and they have scheduled many more meetings. He is very arrogant. He knows I’m a Jew and a Christian.

I really made him mad one day when I said that the Egyptian people ousted Morsi (Leader of the Muslim Brotherhood) because they didn’t want sharia law. He unloaded on me that it wasn’t true, and blamed the whole thing on the Egyptian military.

His Twitter name is Texas Muslim Republican. I made a comment to him one day about the name being ludicrous. He also called Bobby Jindal a “Bottom Feeder”, which made me angry. He started following me that day. That gave me the creeps and I blocked him.

Freedom Outpost had a good article on Elibiary yesterday:

“Mohamed Elibiary has become a favorite punching bag of anyone pointing to the Islamist influence in the Obama administration. He’s done much to bring the attention on himself, as he openly hates conservatives, Christians, and anyone who might stand against Islam or Obama. There is a long train of racists, bigoted comments that he’s spewed, and most of them have been saved for posterity by the world wide web.

#ArabSpring isn’t just happening in #MidEast but also in Washington DC, where US policy makers are learning the limits of autocratic allies.

Patrick Poole of the PJ Tattler was kind enough to round up a wide range of Elibiary’s abuses in a recent article.

From the PJ Tattler:

Elibiary admitted that his mentor and long-time friend was none other than Hamas terrorist leader Shukri Abu Baker, who is currently serving a 65-year prison sentence. In 2003, Elibiary was listed as a board member for the Council on American-Islamic Relations (CAIR) Dallas chapter, which was founded by now-convicted Hamas operative Ghassan Elashi.

In Dec 2004, Elibiary was a featured speaker at a Dallas rally honoring the Ayatollah Khomeini as a “Great Islamic Visionary,” an event the Dallas Morning News called a “disgrace.”

In April 2010, he published an op-ed at Fox News pleading with the Obama administration to not kill senior Al-Qaeda cleric Anwar al-Awlaki. In June 2010, he attacked the Supreme Court after they upheld the material support for terrorism statute in an op-ed for the Dallas Morning News.

In June 2011, the IRS revoked the 501c3 tax-exempt status of Elibiary’s Freedom and Justice Foundation forfailing to file the required IRS Form 990s over a period of several years, documents which would reveal the source of his organization’s funding.

In October 2011, I reported exclusively here at PJ Media that Elibiary had downloaded sensitive documents by the Texas Dept. of Public Safety from a secure DHS database, and then unsuccessfully tried to shop them to the media claiming then-Gov. Rick Perry was running an “Islamophobic” operation. Despite multiple claims by top DHS officials that an internal investigation exonerated Elibiary, in Sept 2013 DHS admitted in response to the Judicial Watch FOIA request that no records related to any internal investigation existed, prompting members of Congress to claim DHS was engaged in a cover-up. Texas DPS, having conducted their own investigation, severed their relationship with Elibiary.

After 30 million Egyptians took to the streets to remove Muslim Brotherhood president Mohamed Morsi, leading to his ouster, Elibiary added a Muslim Brotherhood logo to his Twitter avatar in solidarity with the extremist Islamic group.

In November 2013, Elibiary took to Twitter to announce that the U.S. was a shariah-compliant Islamic country.

Elibiary continued his hateful focus on the GOP with a recent attack on Louisiana Governor Bobby Jindal (R-LA) by calling him a “bottom feeder” who was appealing to southern segregationists (as if these people actually exist in a great number – he also seems to forget that the segregationists were almost exclusively DEMOCRATS).

This isn’t Elibiary’s first hateful tweet aimed at Christian Republicans either. He’s made bigoted comments toward Christians a sort of sport – where each new tweet attempts to “out-bigot” the one before it.

As you can see from the above tweet, Elibiary seems to harbor a special animosity for Coptic Christians. But the next tweet takes that hate to a whole new level – one where he advocates for a group of people who would wipe the Copts from the earth if they could.

Perhaps the most disgusting thing that Elibiary has ever tweeted was this horrible “defense” of the Muslim Brotherhood from back in April of 2014. Elibiary actually said that the only time Egyptians enjoyed freedom and democracy was under the rule of the Muslim Brotherhood… what he neglected to mention was that during their rule, the Brotherhood was persecuting and slaughtering Christians (primarily Coptic Christians)!

Elibiary’s defense of the Muslim Brotherhood is grotesque, but again, it’s just par for the Obama administration’s course. If Obama and his flacks are tired of being called Muslim sympathizers, then perhaps it’s time that they stop employing people who openly advocate for terrorist groups like the Muslim Brotherhood while simultaneously turning their bigoted and hateful tongues on American Christians.”

Read more on this story at Freedom Outpost….