In Stunning Move, The Vatican Signs Treaty Today With The State Of Palestine

The Vatican signed a treaty with the "State of Palestine" on Friday, saying it hoped its legal recognition of the state would help stimulate peace with Israel and that... 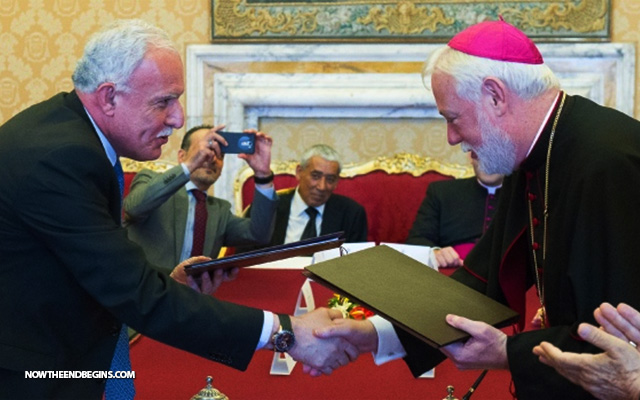 The Vatican signed a treaty with the “State of Palestine” on Friday, saying it hoped its legal recognition of the state would help stimulate peace with Israel and that the treaty itself would serve as a model for other Mideast countries.

“Yea, and what have ye to do with me, O Tyre, and Zidon, and all the coasts of Palestine? will ye render me a recompence? and if ye recompense me, swiftly and speedily will I return your recompence upon your own head;” Joel 3:4 (KJV)

EDITOR’S NOTE: As we inch closer and closer to the time of the Rapture of the Church, we also move closer to the start of the Great Tribulation. Pope Francis, in his role as the False Prophet, is doing everything he can to stack the deck against Israel. Today’s peace treaty and recognition of the state of Palestine greatly advances the prophetical time clock. Israel take note, the Pope and the Vatican are your sworn enemies, as they have once again proved today. Tick, tock…anyone paying attention?

VATICAN CITY  — Vatican Foreign Minister Paul Gallagher and his Palestinian counterpart, Riad al-Malki, signed the treaty at a ceremony inside the Vatican. Israel expressed disappointment when the Vatican announced last month that it had reached final agreement with the “State of Palestine” on the treaty regulating the life of the Catholic Church in the Palestinian territories.

It repeated that regret in a Foreign Ministry statement Friday, saying the move hurt peace prospects and would discourage the Palestinians from returning to direct negotiations. It warned that it would study the agreement “and its implications for future cooperation between Israel and the Vatican.”

Gallagher, though, said he hoped the Vatican’s recognition “may in some way be a stimulus to bringing a definitive end to the long-standing Israeli-Palestinian conflict, which continues to cause suffering for both parties.”

He said that he hoped the treaty could serve as a model for the church in other Mideast countries, where Christians are a minority and often persecuted.

The Vatican had welcomed the decision by the U.N. General Assembly in 2012 to recognize a Palestinian state and had referred to the Palestine state since. But the treaty marked its first legal recognition of the Palestinian territory as a state.

Al-Malki called the treaty an “historic agreement” and said it marked “a recognition of the right of the Palestinian people to self-determination, freedom and dignity in an independent state of their own, free from the shackles of occupation.”

The United States and Israel oppose recognizing the Palestinian state, arguing that it undermines U.S.-led efforts to negotiate an Israeli-Palestinian deal on the terms of Palestinian statehood. Most countries in Western Europe have held off on recognition, but some have hinted that their position could change if peace efforts remain deadlocked.

Israeli Foreign Ministry spokesman Emmanuel Nahshon called the treaty itself one-sided, saying the text ignored “the historic rights of the Jewish people in the Land of Israel and to the places holy to Judaism in Jerusalem.” source