At 67, The Regathered Israel Remains The Gold Standard Of End Times Bible Prophecy

It has been 67 years today, since Israel was declared the Jewish homeland in 1948. This was an amazing fulfillment of prophecy. ... 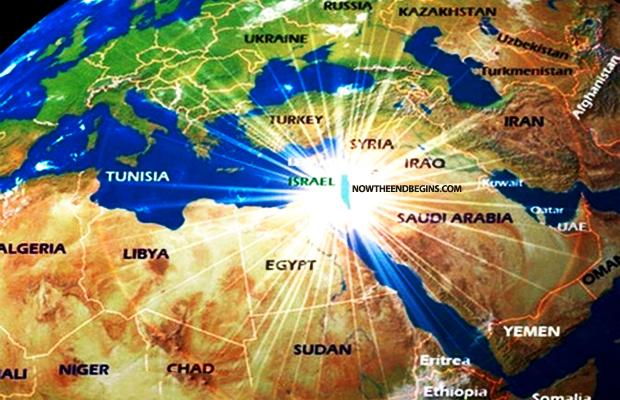 It has been 67 years today, since Israel was declared the Jewish homeland in 1948.

This was an amazing fulfillment of prophecy. The cost of bringing His people home, was a great one – six million Jews murdered by Hitler in the concentration camps of Germany. But because of the Holocaust, Israel was reborn!

“Therefore say, Thus saith the Lord God; Although I have cast them far off among the heathen, and although I have scattered them among the countries, yet will I be to them as a little sanctuary in the countries where they shall come. Therefore say, Thus saith the Lord God; I will even gather you from the people, and assemble you out of the countries where ye have been scattered, and I will give you the land of Israel.” Ezekiel 11:16-17  (KJV)

Satan wasted no time in wreaking havoc on God’s people. War against Israel has become a way of life. So many wars since 1948 — but the one that sticks in my mind more than the others was the 6 day war in June of 1967.

“Now learn a parable of the fig tree; When his branch is yet tender, and putteth forth leaves, ye know that summer is nigh: So likewise ye, when ye shall see all these things, know that it is near, even at the doors.” Matthew 24:32,33 (KJV)

Fought between Israel and Arab neighbors Egypt, Jordan, and Syria, the nations of Iraq, Saudi Arabia, Kuwait, Algeria, and others also contributed troops and arms to the Arab forces. Following the war, the territory held by Israel expanded significantly (“The Purple Line”) : The West Bank (including East Jerusalem) from Jordan, Golan Heights from Syria, Sinai and Gaza from Egypt. Israel was outnumbered and in reality should not have been victorious. But God defended His people and expanded His land. It was truly a miraculous war!

“Fear not: for I am with thee: I will bring thy seed from the east, and gather thee from the west; I will say to the north, Give up; and to the south, Keep not back: bring my sons from far, and my daughters from the ends of the earth; Even every one that is called by my name: for I have created him for my glory, I have formed him; yea, I have made him.”  Isaiah 43:5-7 (KJV)

Today, Hamas, Hezbollah, and now the horrific terrorist group which calls itself ISIS, are determined to wipe Israel off the map. These groups have no idea that Israel is there to stay, because God said so! Israel will always be a nation – God’s nation. This doesn’t mean that there will not be bloodshed. But it does mean that any attempt to eradicate Israel will be futile.

Antisemitism is at its highest point since WWII. It is sweeping Europe, and in America, the college campuses are filled with Muslim agitators, calling for students to support a boycott of any products coming from Israel. The Muslim Brotherhood funds most of these Muslim hate groups. ISIS is better received on most college campuses than Israel!

Last year, Operation Protective Edge took place in Israel. The world watched, as Hamas sent hundreds of rockets, streaming into Israel. Praise God that Israel had Iron Dome to intercept the rockets which would have taken many lives. When Israel decided that they must take out the command centers from where the rockets were launched, Hamas decided to place women and children in these locations. After repeated warnings by PM Netanyahu for the innocent civilians to vacate these areas, Israel had no option except to go ahead with the counter attack. Many times, the Hamas leaders would say that the areas were clear of civilians, and they were not. The Palestinian people are used as pawns by Hamas, just as the PLO used them.

Most of the world, and the U.N. declared Israel to be the aggressor, and they brought charges against Israel for “Crimes against humanity.” This is so far from reality— it is truly unbelievable.

Now, with the American government talking with Iran about their quest to be a nuclear power, Israel once again sees the possibility of an attack — but this time, a nuclear attack. Our president has disdain for Israel, and doesn’t choose to hide it. When PM Netanyahu came to address our Congress, President Obama would not see or talk with him. Instead, Obama sent a group of political agitators over to Israel to interfere with the elections. Obama’s goal was to insure that PM Netanyahu would be defeated.

God had other ideas, Netanyahu not only won the election, but by a landslide!

So, here we are, 67 years after the rebirth of God’s Nation. Isn’t it amazing that we (Christians) know things about the future because our God has told us in His Word?!

We love Israel. We support Israel. Those who teach Replacement Theology are completely duped. RT is the belief that the Church replaced Israel in God’s plan and in His heart. That is a lie from the pit of hell. The Church is the Church and Israel is Israel!!

AM YISRAEL CHAI. THE PEOPLE OF ISRAEL LIVE!!