Gallup CEO: I May ‘Suddenly Disappear’ for Telling Truth About Obama Unemployment Rate

Just about a week ago, the CEO of the Gallup polling firm, boldly stated that the White House was lying about the “real” unemployment rate.... 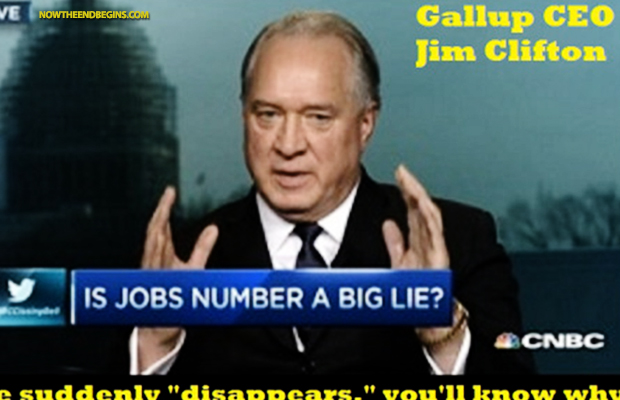 Just about a week ago, the CEO of the Gallup polling firm, boldly stated that the White House was lying about the “real” unemployment rate.

He made his claim quite clear after displaying a chart which showed that the numbers are not reflecting people who have given up looking for work. He claimed that there were other factors that were skewing the WH official unemployment rate as well.

But on Sunday, the head of the well known polling firm backpedaled on his claim.

“Jim Clifton, the Chairman and CEO of Gallup, recently told CNBC that he was worried he might “suddenly disappear” if he disputed the accuracy of what the U.S. government is reporting as unemployed Americans, Wall Street on Parade reported.”

His appearance on CNBC came days after he claimed the official unemployment rate being trumpeted by the White House, Wall Street and the media is a “big lie.”

“None of them will tell you this: If you, a family member or anyone is unemployed and has subsequently given up on finding a job — if you are so hopelessly out of work that you’ve stopped looking over the past four weeks — the Department of Labor doesn’t count you as unemployed,” the venerable firm’s chief executive officer and chairman last week wrote in his blog.

“Right now, as many as 30 million Americans are either out of work or severely underemployed. Trust me, the vast majority of them aren’t throwing parties to toast ‘falling’ unemployment.”

Read rest of story on NewsMax…