Finally, a UN official comes out with the truth about so-called “Climate Change.” Many of us have known for years that this global warming mantra is a means to... 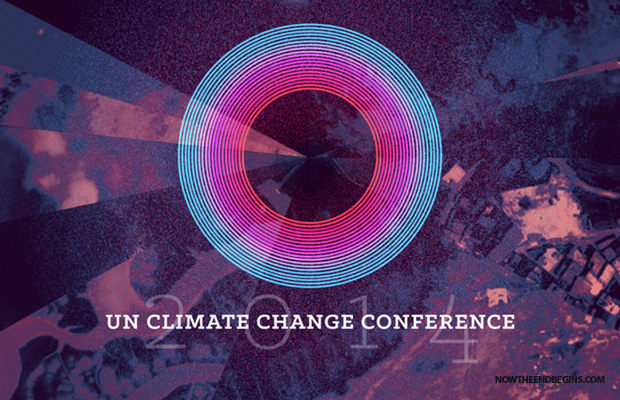 Finally, a UN official comes out with the truth about so-called “Climate Change.” Many of us have known for years that this global warming mantra is a means to an end for the progressives, and now it’s in print.

“Climate Change is an excuse to end the economic development model of the industrial revolution.”

I cannot overemphasize the importance of this link. If you want to understand why the press for “Climate Change” regulations is so strong–despite the fact an increasing number of reports are coming out demonstrating the total falsity and manipulation of the evidence for global warming, let alone a causal link to man—here is your answer.

Last year’s Climate Change poster for the UN. Note the all-seeing eye of Horus in the middle, as well as the Illuminati triangles.

The Top UN Climate Change Official is optimistic that a new international treaty will be adopted at Paris Climate Change conference at the end of the year. However the official, Christiana Figueres, the Executive Secretary of UNFCCC, warns that the fight against climate change is a process and that the necessary transformation of the world economy will not be decided at one conference or in one agreement.

Leftist/Socialist/Communist/Progressive tyrants see the lie of Climate Change as their way to transform the world economy into their own corrupt image. As with all such plans, it would ensure a small upper-crust of well-paid hacks, attending fancy meetings, and luxuriating at our expense, while the vast majority of the world suffers in increasing squalor and lack, with no hope of rising above it. If you think it’s bad now (and in many places it’s incredibly sad) just wait till this nonsense prevails, and the wealth of the world shrinks into oblivion.

“This is probably the most difficult task we have ever given ourselves, which is to intentionally transform the economic development model, for the first time in human history“, Ms Figueres stated at a press conference in Brussels:

“This is the first time in the history of mankind that we are setting ourselves the task of intentionally, within a defined period of time to change the economic development model that has been reigning for at least 150 years, since the industrial revolution. That will not happen overnight and it will not happen at a single conference on climate change, be it COP 15, 21, 40 – you choose the number. It just does not occur like that. It is a process, because of the depth of the transformation.”

Climate Change is a Gruberistic manufactured lie, designed toward a diabolical end. Many well-meaning people have been sucked into the propaganda vortex, and sincerely believe the world is in danger if we don’t address this “crisis.” Don’t buy it. True science demonstrates the world is NOT warming as the models have predicted, and man’s activities are NOT contributing to some future crisis as the seas rise and ice caps melt, etc., etc., etc.

Yes, we need to take better care of the planet, but CO2 (as one example) is not a problem–in fact, it helps the world be more lush and fruitful. Please… please… if you’re concerned about Climate Change, you need to do more research. Don’t be a useful idiot.

P.S. Please note this link is not to some wild-eye “conspiracy” site… but to the United Nations itself. They are so convinced of their rightness and their power now that they’re not even hiding anymore. [1] – source

“Their inquiry’s central aim will be to establish a comprehensive view of just how far the original data has been “adjusted” by the three main surface records: those published by the Goddard Institute for Space Studies (Giss), the US National Climate Data Center and Hadcrut, that compiled by the East Anglia Climatic Research Unit (Cru), in conjunction with the UK Met Office’s Hadley Centre for Climate Prediction. All of them are run by committed believers in man-made global warming.” [2] – source

OVER 30,000 SCIENTISTS SIGN PETITION CLAIMING GLOBAL WARMING IS A HOAX:

Purpose of Petition: The purpose of the Petition Project is to demonstrate that the claim of “settled science” and an overwhelming “consensus” in favor of the hypothesis of human-caused global warming and consequent climatological damage is wrong. No such consensus or settled science exists. As indicated by the petition text and signatory list, a very large number of American scientists reject this hypothesis.

Publicists at the United Nations, Mr. Al Gore, and their supporters frequently claim that only a few “skeptics” remain – skeptics who are still unconvinced about the existence of a catastrophic human-caused global warming emergency.

These scientists are instead convinced that the human-caused global warming hypothesis is without scientific validity and that government action on the basis of this hypothesis would unnecessarily and counterproductively damage both human prosperity and the natural environment of the Earth.

The Petition Project features over 31,000 scientists signing the petition stating “there is no convincing scientific evidence that human release of carbon dioxide will, in the forseeable future, cause catastrophic heating of the Earth’s atmosphere“. (OISM)

There are several claims that large numbers of scientists do not agree with the theory ofclimate change, the best known of which is a petition organised by the Oregon Institute of Science and Medicine (the OISM petition). This petition now appears to be signed by over 32,000 people with a BSc or higher qualification. The signatories agree with these statements:

No evidence has ever been offered to support the first statement, and the second statement is in flat contradiction with the scientists who study climate change. There are also valid issues regarding the methodology:

In the professional field of climate science, the consensus is unequivocal: human activities are causing climate change and additional anthropogenic CO2 may cause great disruption to the climate. [4] – source