"Greek prime minister Alexis Tsipras has blasted European economic sanction on Russia over the Ukraine crisis. The left-wing firebrand accused Brussels of hypocrisy over the sanctions, saying it was... 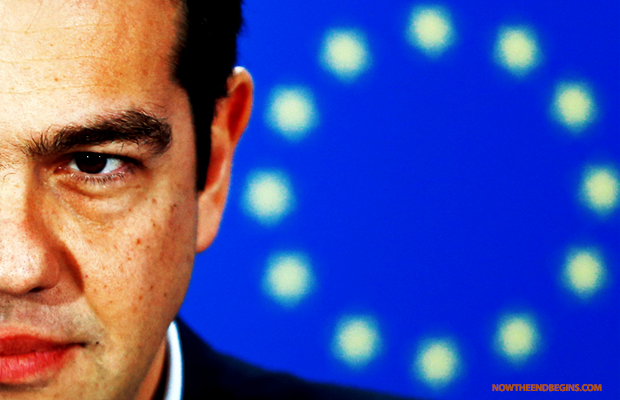 Alexis Tsipras comes charging out of the gate by forming alliance with Russia.

EDITOR’S NOTE: Last week, NTEB released the ground-breaking story on the new Prime Minister of Greece, Alexis Tsipras, and we showed you the ASTONISHING connections between him and prophecies related to the Antichrist. So you just might want to know that his first official act is to form an alliance with…RUSSIA.

To those who have followed the EU, this is surprising and disturbing. He seems to be arrogantly distancing himself from the historical platform of the EU. Of course, Russia is not a member of this institution. Russian considers the EU to be an arch enemy, especially with sanctions being implemented against them by the EU.

Business Insider reports today that “Greek prime minister Alexis Tsipras has blasted European economic sanction on Russia over the Ukraine crisis. The left-wing firebrand accused Brussels of hypocrisy over the sanctions, saying it was unfair not to pursue Russian oligarchs with money invested overseas.

“If you want to punish Russia, you need to punish all the countries where Russian multi-billionaires have invested their assets,” Tsipras told German magazine Stern. source

We are looking for Jesus Christ, and not the Antichrist. But when we discovered this new “mystery man” who from nowhere has taken rock-star control of Greece, is backed by George Soros, has formed alliance with Russia and is talking with Pope Francis about a peace treaty between Israel and the Palestinians. We thought you just might want to know about it.

Even before his victory in Greece, Alexis Tsipras was warming up to Putin of Russia, and at the same time he was creating tension between Greece and the EU. On January 27th, his party spoke in Brussels about easing off sanctions against Russia. Greece has been a member of the EU since its inception, but the EU has always considered Russia to be a staunch enemy.

Of course, the sanctions against Russia came after their invasion in Ukraine.

“The Russian leader’s top foreign policy adviser Yuri Ushakov said that Putin congratulated Tsipras on his victory in last month’s general elections and on the assumption of his duties as the new prime minister of Greece.

“The discussion was very warm and constructive, he said, noting that President Putin invited Tsipras to Russia. He also said that the will for a more active development of bilateral relations was reaffirmed.” source

This has troubled many nations of the EU, especially in light of the fact that Tsipras has arrogantly inferred that Greece really doesn’t need the EU Commission. Since his victory, he has suggested that perhaps Greece does not need the outdated EU, which he considers the worst offenders of “Austerity” which is the mantra of his newly elected party.

“Relations between Russia and the new government in Greece continue to warm.” source
Doesn’t that sound like something out of the mouth of Putin? Nothing good can come with the alliance of Greece and Russia.

Russia, being in economic turmoil at the present time, is scheming in ways to insure their survival. Greece is in that same position. But now, with its new leader making what seems to be an alliance with Russia, “The plot thickens” takes on a whole new meaning.

What will happen is anyone’s guess. But the world is certainly watching this unfold. It seems strange to me that his first matter of business was meeting with Pope Paul, and his second was to travel to Russia.

I am merely speculating here, but knowing Russia’s relationship with Iran, the new alliance between Greece and Russia does make me think of the Scriptures in Ezekiel 38 and 39. Is this all coming together right before our eyes?

We are tracking Alexis Tsipras. This is most definitely a man to watch.

Maranatha!
May He come quickly